A to Z Blogging Challenge - D is for Dreean 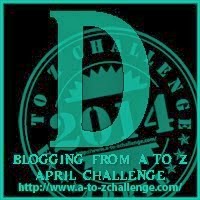 A central character in my Jewels of Chandra series is from a humanoid species known as the Dreean. His name is Rhone and he's introduced in the first book, Diamonds and Dust. Rhone is 5'5", an average height for a Dreean male and quite stout. He has a barrel chest and large biceps. His distinguishing characteristic is a nose like a pig's snout, which causes my human hero, David, to unfairly judge him as unintelligent when they first meet. In point of fact, the Dreean are highly intelligent and very loyal, often employed as bodyguards. Rhone appoints himself as David's protector, feeling the man without magic needs some extra help. The Dreean manifest their magic in their aim; any weapon they throw will hit its mark.

*There should be a photo right here but Dreeans are notorious for not wanting their picture taken...not to mention they don't live on Earth. Sorry but you'll have to use your imagination. Think of a hairy caveman with a pig's snout and an impressive double row of sharp teeth.*

Would you be able to carry on a sensible conversation if you had to watch someone's snout bouncing around and wiggling while you talked?
Posted by River Fairchild at 12:00 AM

Email ThisBlogThis!Share to TwitterShare to FacebookShare to Pinterest
Labels: A to Z Blogging Challenge, A to Z Challenge, Diamonds and Dust, Dreean, Jewels of Chandra, mythology, River Fairchild