Flex by Ferrett Steinmetz is an engrossing fantasy set on modern-day Earth. I loved his space opera, The Sol Majestic, so had to try another book by this talented author.

The magic system has a bad side. For every wonderful gift, a dire consequence is required. The costs of doing magic are high and leave the ‘mancer with less and less. Something of value has to be given in order to do magic.

Magic takes their homes, their friends, everyone and everything they love. Using magic is like a drug in this realm, and the magic users are addicts. They give up everything for their moments of glory and marvel.

The main character, Paul Tsabo, is an ordinary person dealing with some bad luck. He was once a cop, who gained notoriety for taking out a ‘mancer. He lost a foot during the battle, and the loss required him to take a new job. He now works as a claims adjustor at an insurance company.

Thing is, it’s there he learns he has a gift – bureaucracy ‘mancy. He can do extraordinary things with forms and reordering the world. He has to hide his gift, but he can’t stay away from it, especially once his daughter is horribly burned in a fire caused by the consequences of someone else doing magic.

He's as obsessed with saving his daughter as finding quiet moments to do ‘mancy. This leads to him tracking down the ‘mancer who caused the fire that injured his daughter. Although he wants revenge in the worst way, he also needs to learn to hone his magic so he can help his daughter. This odd alliance and the search to find a better way to do magic drives the story.

The characters are very relatable. Most of us love to get lost in the beauty of our daydreams, which is very much like how the magic works in this book. It’s a great adventure with a great dose of self-discovery. Paul has to figure out what matters most and how to tame his ‘mancy for good.

I was entertained until the last page, and was rooting for Paul, his new ally, and his daughter. I was also rooting for magic. I highly recommend this fantasy.

The first in a series by the author of The Sol Majestic that is “what might result if you put Breaking Bad and Reddit in a blender and hit ‘frappe.’ ” (B&N Sci-Fi Blog)

FLEX: Distilled magic in crystal form. The most dangerous drug in the world. Snort it, and you can create incredible coincidences to live the life of your dreams.

FLUX: The backlash from snorting Flex. The universe hates magic and tries to rebalance the odds; maybe you survive the horrendous accidents the Flex inflicts, maybe you don’t.

PAUL TSABO: The obsessed bureaucromancer who’s turned paperwork into a magical Beast that can rewrite rental agreements, conjure rented cars from nowhere, track down anyone who’s ever filled out a form.

But when all of his formulaic magic can’t save his burned daughter, Paul must enter the dangerous world of Flex dealers to heal her. Except he’s never done this before—and the punishment for brewing Flex is army conscription and a total brain-wipe.

The Perseids is the biggest and showiest meteor shower of the year. Every year, it's at the same time-mid August. The peak is August 12th, but you should already be able to view some lovely shooting stars if you have a dark sky. 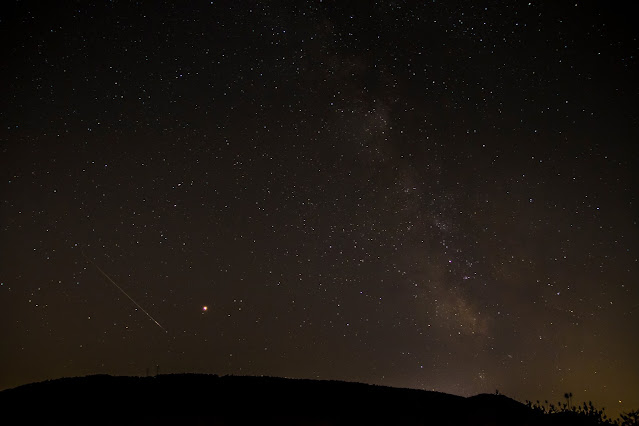 Even without it being Perseids season, there are 6-10 shooting stars every hour.

The Perseids will appear as quick, small streaks of light. They get their name because they look like they’re coming from the direction of the constellation Perseus.

The Perseids are fragments of the comet Swift-Tuttle, which orbits between the Sun and beyond the orbit of Pluto once every 133 years. Every year, the Earth passes near the path of the comet, and the debris left behind by Swift-Tuttle shows up as meteors in our sky.

Perseus is located under Cassiopeia: looks like a big W to the right of the Big Dipper. Here's a star chart.

For the next two years, the Moon will interfere with the viewing of the Perseids. So this is your best chance for a lovely show until 2024.
I'll be out astronomizing. Hope you get out too! If your skies are sucky, you can watch live with NASA at https://www.youtube.com/channel/UCYKfAzPEXMQsGtNfBCNa_BA
Posted by M Pax at 12:00 AM 1 comment: