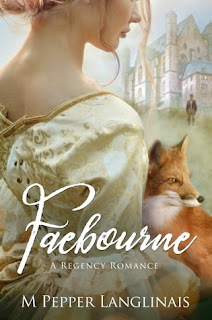 Blurb: Duncan Oliver was in every respect an unremarkable gentleman.
When mild-mannered Duncan Oliver is abducted by the Milne brothers and taken to their legendary home of Faebourne, his unexciting life becomes much more interesting. Adelia Milne has been cursed, and Duncan is her chosen champion to break the spell. Duncan may not be a hero, but he is a gentleman, and he refuses to leave a lady in distress. He becomes determined to take on the quest on Miss Milne's behalf. Meanwhile, an unlikely rescue team forms in the pairing of Duncan's best friend George and valet Davies. As they set out for Faebourne--and also perchance to learn more about Davies' obscured family history--what begins as an unequal partnership quickly blooms into friendship... and possibly something more.

My review: Duncan Oliver's sedate life is turned on its head when he's kidnapped by two odd men he's just met at the local club. They bring them to their mysterious manor Faebourne to help remove a curse from their sister, Adelia Milne. A task which Duncan is unsure he's up to. Yet his trusted valet, Davies is quick on the case to find his employer. Duncan's best friend George accompanies him on the journey, hoping for some excitement. The two men find so much more.
This is not what I expected from a Regency Romance, but in the most wonderful of ways. The writing is light and crisp, true to its genre, but coming to the beautiful Faebourne we have a whole different type of story. It is like a fairy tale of old with its curses and quests. Grass slippers and a song who is many songs. Plus Adelia's fox familiar Aloysius who is quirky and clever and makes me want my own! The Milnes are odd themselves and often had me smiling. While I thoroughly enjoyed that aspect of the book, it is the cast of characters that shine. Duncan is the polite and boring everyday man who must stretch himself to try to become a hero. Davies wrestles with his newfound lineage and his attraction to George. While George himself is surprised by what he finds in himself traveling with Davies and what he wants in life.I'd love to read much more from the author and this of this type of Regency Romance. Well done!

Evolution of a series cover

In the book world, both indie and traditional, common knowledge is that one should occasionally recover and repackage a long-running novel or series. I run into this all of the time when I teach. Even though I assign the same booklist, the covers keep changing from year to year!

Recently, I attended an "author mastermind" conference that involved branding and taking one's authorship more seriously. Upping one's game. It seriously kicked my you-know-what! It also inspired me to take a hard look at my covers, my promo style and release schedule. In this post I'll focus on my Fireseed series covers.

Here is the evolution of the first two of the Fireseed novels, Fireseed One and Ruby's Fire over time.
See the whole series here.

Oldest, on bottom:
When I launched the series in 2011 I wanted to break out of the YA trope of girls in gowns, and even from the photo retouched cover. Coming from the art world, I also wanted to include my own interior illustrations. I hired digital cover artist Jay Montgomery, who taught at the Savannah College of Art and Design. I designed the roughs. These worked for a while as they attracted attention from their unique look. But I decided to scrap my interior illustrations as some thought they made the book seemed aimed for the 9-12 year-old set. They are meant for older teens and adults. And though the covers were an homage to the classic 50s sci-fi covers, they also began to seem dated.

The big portraits, next oldest:
Najla Qamber designed these next incarnations, with close-up heads and a more trendy type font. These sold quite well and I was happy with them.

The edgy setting covers, second to top:
Then, I hired publicists, who convinced me YA sci-fi covers no longer featured up-close faces, but had object covers such as the Hunger Games crests or otherworldly settings. We looked at the top 100 YA sci-fi on Amazon, and I took the bait. Again, Najla delivered spectacular covers with a futuristic title font. The look was sophisticated, gritty - everything I love. But the covers did not sell as many books. Ultimately, I realized that in YA, and even in adult fantasy, people are drawn to, well PEOPLE!

The brand new 2019 covers, on top:
In a meeting with a mentor from the author mastermind conference, we looked again at the Amazon top 100 in YA sci-fi. Yes, we still saw object covers, but we also saw a resurgence of faces and human figures, which filled me with relief. The lead characters in this newest set by Najla are in mid-picture, walking or standing in front of spooky cool settings, the hallmark of the series. It's a burning sky, it's harsh desert, it's strange jutting rock formations and thorny Fireseed blossoms literally on fire. It's topped off with a big, brash title font that reads clearly from a thumbnail.

Who knows if and when I'll design another set. There's something I love about each rendition. Which one do you like best and why? Have you recovered and repackaged your novels? If so, what prompted it?