Speculative Fiction Worth Reading - Powers of Darkness: The Lost Version of Dracula 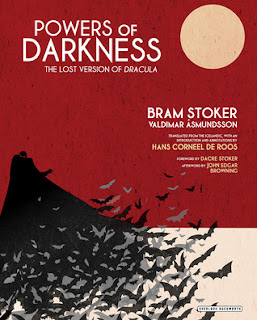 Blurb: Powers of Darkness is an incredible literary discovery: In 1900, Icelandic publisher and writer Valdimar Ásmundsson set out to translate Bram Stoker’s world-famous 1897 novel Dracula. Called Makt Myrkranna (literally, “Powers of Darkness”), this Icelandic edition included an original preface written by Stoker himself. Makt Myrkranna was published in Iceland in 1901 but remained undiscovered outside of the country until 1986, when Dracula scholarship was astonished by the discovery of Stoker’s preface to the book. However, no one looked beyond the preface and deeper into Ásmundsson’s story.

In 2014, literary researcher Hans de Roos dove into the full text of Makt Myrkranna, only to discover that Ásmundsson hadn’t merely translated Dracula but had penned an entirely new version of the story, with all new characters and a totally re-worked plot. The resulting narrative is one that is shorter, punchier, more erotic, and perhaps even more suspenseful than Stoker’s Dracula. Incredibly, Makt Myrkranna has never been translated or even read outside of Iceland until now.Powers of Darkness presents the first ever translation into English of Stoker and Ásmundsson’s Makt Myrkranna. With marginal annotations by de Roos providing readers with fascinating historical, cultural, and literary context; a foreword by Dacre Stoker, Bram Stoker’s great-grandnephew and bestselling author; and an afterword by Dracula scholar John Edgar Browning, Powers of Darkness will amaze and entertain legions of fans of Gothic literature, horror, and vampire fiction.
Christine's review: This is an Icelandic rewrite of Dracula, or shall we say, fanfiction. It's been some years since I've actually read the original, so I can't speak on a lot of differences. Definitely there is more focus on Harker and the blonde bride in the castle, and a lot more description of the castle itself. It's not at all erotic or romantic. The Count is portrayed as more evil, but the last third is more of a synopsis than anything else. What I found I enjoyed a lot more than I expected was the introduction and the notes in the margins of the story itself with all the history, interesting Stoker and Asmundsson facts, and translation reasons. So while the rewrite wasn't all I had hoped for, the book as a whole is well put together.
Posted by Christine Rains at 6:36 AM 8 comments:

The Conjunction of Jupiter and Saturn #astronomy #Science #

I'm sharing a video I took of a rare event.
The great conjunction of Jupiter and Saturn was at its pinnacle on Monday night (12/21/2020). I was able to get out my trusty telescope, Orson Bradbury, and do some stargazing. The forecast had us cloudy, but it turned out to be a beautiful day. It was almost 60 and the sky was clear. 60 isn't normal for these parts in December. However, the wind was roaring. You can probably hear it whistle through the telescope in the video.
This was a once in 400 years event, so I was glad to see it. The video was taken through my 11mm Nagler. That translates into high magnification for those of you not well versed in telescope-speak. To see both in that eyepiece was stunning and something that will never happen again. At least, not while I'm alive. So, I hope you enjoy the video. It's not the best, but you get to see something really special.
Posted by M Pax at 12:12 AM 3 comments: