“A book for anyone who has heard the horns of Elfin in the distance at twilight, as much as it is for readers who crave fine literature and are certain that elves and their kingdoms are bosh.” - Neil Gaiman. 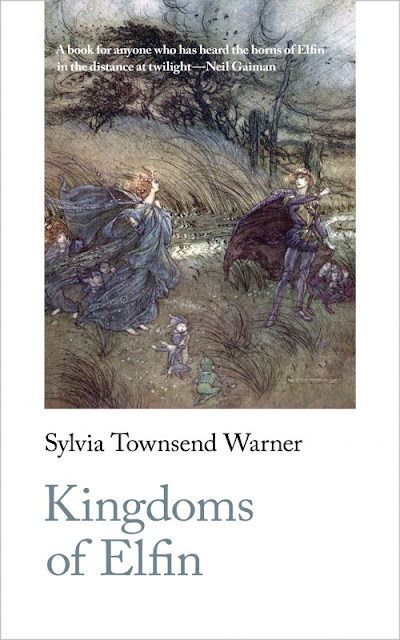 I fell in love with this collection of short stories. I confess I hadn’t heard of Sylvia Townsend Warner and hadn’t read any of her work, although she wrote numerous novels over a long life, and many of these stories were originally published in the New Yorker. I was introduced to the book at a conference, at the launch of a new edition by Handheld Press (it was originally published in 1977, the year before Warner died). I’m very glad I took the plunge and bought a copy as the book is a gem. It’s described as containing “sixteen sly and enchanting stories of Elfindom”, and that catches it perfectly: these are stories about the Elfin courts that are dotted around in our world, hidden away under hills and in woods: Brocéliande in Brittany, Elfhame in Scotland, the Kingdom of the Peris in Persia, Mynydd Preseli in Wales, Zuy in the Low Countries, Pomace near where I live in Herefordshire in England (haven’t found it yet), and so on.

They are aristocratic societies, with queens (never kings) and nobles - as well as those less lucky fairies who have to do all the work. The fairies can fly, but to do so is beneath the dignity of most higher-ranking Fay. The delight of the book is in the regional differences and quirks of the courts: each is a little world with its own oddities and eccentricities, so that the book reads a little like a travel guide written by an expert of Elfin cultures – although that makes them sound dry, when they breathe with wit and intrigue and conflict. No end of intriguing details of each distinct court are thrown in: the pack of hunting werewolves at Brocéliande, the rotating island of the Peris, the fairies’ various obsessions with birds, or singing four-part harmonies, or the use of larks for divination, or playing the flageolet, or whatever it may be.

The elves in Warner’s stories are capricious, self-obsessed and bordering on the sociopathic (from our perspective). Mortals - us - are their playthings, to be stolen at birth and then cast aside when they become boring or old. Fairies, too, are treated with utter cruelty when circumstance conspires: these are creatures capable of delicate gentleness and absolute brutality, like highly-cultured toddlers. In truth, apart from their longevity, and their wings, and their occasional magic use, there isn’t too much difference between the Elfin and us - not that they would see it that way. They call humans “mortals”, although, in fact, we have immortal souls, and the Fey do not. They are simply long-lived. They are equally fascinated and bemused by religion - although mostly indifferent, as they are to all aspects of humanity.

The stories are often slight in tone and literary in style. They perhaps have a tendency to peter out, to dazzle and delight and then stop. This is not the sort of fiction where you get a whizz-bang, twist ending. Several times I wanted to know more about certain characters, certain situations, but that gets left for the reader to think about on their own. You may like that, you may not. A common theme is the outcast: a fairy who leaves their Court for one reason or another (intrigued, bored, thrown out, left behind), or a mortal changeling within a Court (a baby stolen at birth or an adult who finds their way inside).

The writing is beautiful, full of subtle literary flourish. More than once I found myself rereading sentences simply in order to savour their perfectly-formed elegance, their economy. Towards the end of her long life of writing, Warner was clearly a fairy queen of sentence-weaving. Her style is sly, witty, beautifully-observed, luscious. As I say, a gem of a book.

When I'm inspired to write a science fiction story, it's almost always because of something I've seen or read in the news. Climate change, new technology, an immune virus, or a controversial change in laws. This is the spark that changes the future, and I wonder where it will take us.

The rocket of humanity has blasted off, and most people don't see a bright future. Dystopian books are popular, but is this because so many folks have accepted our dismal tomorrow or because they're looking for solutions?

By exploring what is logically possible through science fiction, we can seek out solutions to problems happening in society right now. We may not have the technology or a society which demands that change, but it may inspire people to become scientists or sociologists. Imagination is just as important as science. 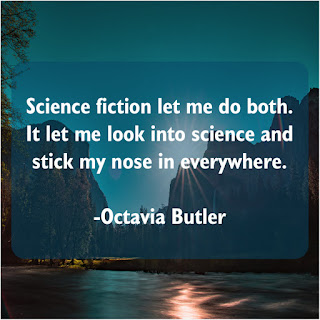