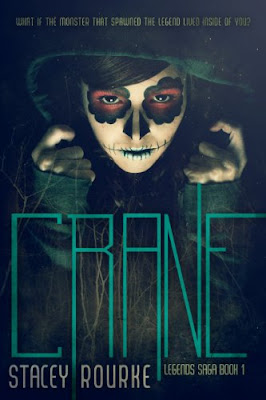 The Horseman is unending,his presence shan’t lessen.If you break the curse,you become the legend.Washington Irving and Rip Van Winkle had no choice but to cover up the deadly truth behind Ichabod Crane’s disappearance. Centuries later, a Crane returns to Sleepy Hollow awakening macabre secrets once believed to be buried deep.What if the monster that spawned the legend lived within you?Now, Ireland Crane, reeling from a break-up and seeking a fresh start, must rely on the newly awakened Rip Van Winkle to discover the key to channeling the darkness swirling within her. Bodies are piling high and Ireland is the only one that can save Sleepy Hollow by embracing her own damning curse.But is anyone truly safe when the Horseman rides?

Oh Wow!!I'll say right at the beginning, Crane by Stacey Rourke is a fabulous adaption in regards to Sleepy Hollow, Ichabod Crane, and the Headless Horseman.The Author, Stacey Rourke has an absolutely brilliant writing style that blew me away. Each descriptive page had me hungering for more, that I found it difficult to put the book down.I like humor, especially sarcastic humor, and Crane did not disappoint. And to enlist Rip Van Winkle into the storyline was over-the-top enjoyment! I loved the main character, Ireland and her strength to persevere in her battle with conquering the Horseman. I never leave spoils~~~Oh Boy!! You will be amazed!!!Whether I'd been so caught up in the story or it wasn't mentioned to lure the reader into book 2, I can't remember if it was explained how Ireland Crane was related to Ichabod.I highly recommend this phenomenal book. 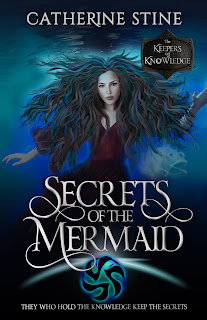 I love writing books set in beach towns and characters with complex relationships to the ocean. In my novel Witch of the Cards, I wrote about a woman learning that she hailed from a sea witch dynasty. In Pictures of Dorianna, I wrote about a girl who, unbeknownst to her, makes a deal with the Prince of Darkness. This happens when his supernatural video of her on a Coney Island beach goes viral, spinning her life out of control.

In this new urban fantasy, Secrets of the Mermaid, I got to study mermaid lore and deep-sea creatures, and create mysterious merfolk characters. My heroine, Indigo Rain moves to a glamoured gothic beach town called Pyreshore and becomes a Keeper of the merfolk’s secret history. Indigo is a mermaid with a private slide from her basement into the Atlantic Ocean, and her own deep, dark secrets.

Her eventual love interest, Bay Finley, is of Royal merman stock, while Indigo, is of common stock. So the added “special sauce” is the Harry and Meghan royal versus commoner element.

Who wouldn’t love to suddenly be able to transform from human to mermaid? I give readers the experience through Indigo. “Out of sheer exuberance, she performed somersaults, twirls, and grand swoops up and over the seabed ravines and ridges.” Or even better, her first dive with Bay, her fellow merfolk researcher and secret crush:

“They plunged in. Indigo felt the transformative rush as her legs changed to a single tailfin, and her hips and below became a sheen of golden scales. She breathed in water and wriggled her way downward. As she did, she stole peeks at Bay. His merman patterns, like ruddy tribal tattoos, emerged along his jawline, down his muscled arms and on both sides of his lean torso. His scales, a rusty gold, matched the patterns on his skin, and glittered brightly against the darker waters like the sea glass she so loved. His chest and abs seemed to swell and flex at the same time with the strength of a Poseidon, the grace of a marathon swimmer, the glory of a merman Royal in his prime. She forced herself to look away, and to concentrate on seeking out the tablets, whether they were the nano-synth ones, more of the type in that hidden burial chamber, or another type of artifact altogether.”

I discovered deep-sea fish like the ghost shark with an extra set of jaws inside its maw that can suddenly extend like a slingshot to gobble prey, and the dragon fish that produce their own glowing light. They protect Indigo when a dangerous phantom attacks her and their light guides her back home. Mermaid lore is also endlessly fascinating, and disturbing! One element I used was that mermaid were known to lure sailors undersea and drown them, in order to use them to fertilize their ova to make wee little merbabies. Rather gruesome, and one shameful thing in Indigo’s past she feels compelled to atone for. You have to read the book to find out how! No spoilers here. If you love the ocean and its magical creatures, why not spend time with Indigo, Bay and the quirky cast of characters on Pyreshore and under its coastal waters?

See the book on Amazon (free on KU!)
Posted by Catherine Stine at 6:45 AM 5 comments:

The Backworlds Box Collection Books 4, 5, and 6 is now available for preorder. The box set releases March 12, 2021, and its 99 cents for a limited time. Grab your copy! 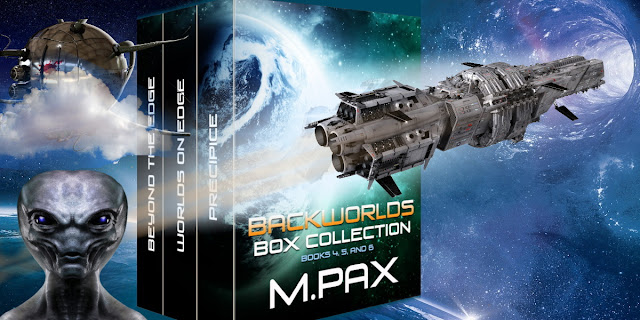 The galaxy beyond the Backworlds is rife with trouble. The desperate search to save a friend ends in the discovery of an unstoppable enemy. This boxed set contains books 4, 5, and 6 in the Backworld series: Beyond the Edge, Worlds on Edge, and Precipice.

Some truths are better left unfound. For two years, Lepsi has been missing. A haunted spaceship has a message from him. Maybe Lepsi isn’t dead. Craze and Captain Talos travel to uncharted worlds, searching a region of the galaxy beyond the Backworlds. Out there, they stumble upon a terrible truth.

Home is worth the fight. War is coming. A horde of merciless aliens poise just beyond the Edge. Racing ahead of the apocalypse, Craze rushes to warn his people and plan a defense. Only, he can’t go home. Banned from Pardeep Station, he must wage another war to save his home.

Salvation comes at a price. A new enemy wants to destroy the galaxy. The Fo’wo’s want another war. Annihilation is coming to the Backworlds, and Craze’s option to prevent the genocide of his people is a nightmare. The best chance for survival is to overcome a century of hate and forge an alliance with the Fo’wo’s. If he succeeds, Craze will be the most hated man in the galaxy.
Posted by M Pax at 12:00 AM 1 comment: