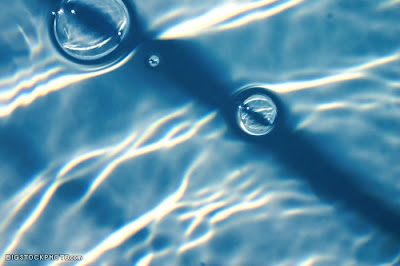 Have you heard of the time cloak?

Moti Fridman and colleagues, at Cornell University in Ithaca, NY, created a hole in time using the temporal equivalent of an invisibility cloak.

Invisibility cloaks are produced by distorting electromagnetic fields in extreme ways, moving light around an area, so that it can't be seen in that area. Physicists have used them for light, sound and ocean waves.

There's even an illusion cloak which makes an object look like another object. Excellent.

Granted it took a huge amount of energy and a huge-ass machine to create the time cloak for only a fraction of a fraction of a second. But that won't last. Fridman says there might be a use for a time gap lasting fractions of a second in routing competing streams of data to a processor.

More in the time cloak.

What could you imagine using a time cloak for? What about an invisibility or sound cloak? An illusion cloak? Have an idea for a cloak of you're own?

I used an invisibility cloak and an illusion cloak in The Renaissance of Hetty Locklear. Do you know about Hetty? 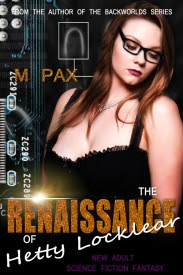 The journey into adulthood is stranger than she expects.

Graduation from community college isn’t the magic elixir Hetty Locklear counts on for becoming an adult. Her parents, who work the Renaissance fair circuit, insist she spend part of the summer with them. Hetty doubts pretending to live in the Middle Ages will help her find her way.

To make it worse, an entity haunts her at her dead-end job, warning her of a dangerous man she doesn’t know. The ghost leads her to a lover who has a lot of secrets. He pulls her farther into peril and into a strange, hidden world of genetic experimentation.

July has been a time of specials for this book, and I'm going to continue the fun here. Write "Boo" in your comment and I'll email you an ebook. Offer good until August 5, 2013.

Come one, come all to the Blogger Book Fair!

The Blogger Book Fair is going on all this week, through Friday, July 26, and all are invited to join in on the fun!

The fair is run by Kayla Curry and I can't even imagine how many hours of work she puts into the event to get it up and running. There are hundreds of authors participating and many are holding giveaways and other promotional activities for the fair. In addition, there are tons of fun and creative events going on, including Readers Choice Awards, Flash Fiction and Synopsis Challenges, and Excerpt Days. Visit the events page here to see everything that is scheduled during this fun-packed week. 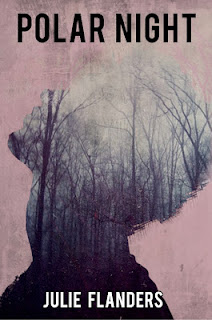 I am taking part in the fair with my novel Polar Night, which will be reviewed by one of the many great book bloggers participating in the event. I'm also interviewing four fellow BBF authors at my blog this week, so please stop by and learn about these authors and their books. In addition, visit me at L.R. Wright's and Shah Wharton's blogs today and at the blogs of Jeff W. Horton and Cathrina Constantine on Wednesday. It's been fun swapping posts and interviews with these authors!

My Untethered Realms comrade M. Pax is also involved with the fair and is giving away ebook copies of The Renaissance of Hetty Locklear. Hetty is an EXCELLENT book so I know you'll want to enter this giveaway if you haven't already read it. Click here for the giveaway page.

Mary and I are both entered into the BBF Reader's Choice Awards, hosted by Shut up & Read, and you can vote for us both here. Polar Night is entered in the "Fantasy - Mature (1)" category and Hetty Locklear is entered in the "Science Fiction - New Adult" category. Please vote for both of us!

And please visit all of us at the Blogger Book Fair this week and "book your trip to far away places!" :)
Posted by Julie Flanders at 5:00 AM 7 comments:

A couple of years ago I saw a shout-out for the Tribute to the Stars anthology, published by Static Movement. The submission guidelines were simple - write a story which would star your favourite actor. Even better, the anthology would be sent to all the actors featured. How could I not submit?

The first person I thought of was William Shatner. It was an easy choice. I grew up watching Star Trek, T.J. Hooker, and a load of other shows he featured in. He...was...my childhood...hero. Coming up with a genre was equally as easy. It had to be science fiction.

A few weeks later the character Ty Booner and his story, Why Do Aliens Love Iowa?, was accepted and later published in the anthology. Two years later you can find Life As I Know It - a re-drafted and re-titled version - in my second short story collection, Taking Time.

Did William Shatner ever read my story? I have no idea. I like to imagine he did, though. Here's an excerpt for you:


“I have a question, Mr. Booner,” Paris said. The boy was sweating, and shaking a little too. “What are all the explosives for?”
In the confusion of having uninvited guests, I’d forgotten about the dynamite. I trotted out the familiar answer. “I think you’re mistaken, Paris. There are no explosives in the shelter or on any part of my ranch.”
“Because keeping them would be in violation of your parole,” Marcy said and then raised her eyes to the ceiling.
“Marcy. There...are...no...explosives.”
“So are what are these for?” Wes asked.
I turned to see a box labelled dynamite in his hands. Paris must have grabbed it when he locked the shelter doors and passed it to Wes.
“I knew it,” Marcy said. “All that time I defended you, and you’re still playing with homemade bombs.”
I threw up my hands up mock surrender. “Okay. You have me. Call my parole officer. But guess what, it doesn’t change anything. You’re still in my house, and unless you want to take a trip on that spaceship, enough already.”
The girl began crying and Marcy shot an icy glare of contempt my way. “What the hell is wrong with you?”
I could probably come up with a dozen different answers, but Khan, who was sniffing the bottom of the door and growling again, caught my attention–there was something outside and he didn’t like the smell of it. Maybe staying in the ranch house wasn’t such a good idea. Even if we’d nailed tight every possible way into the house, we’d be trapped until the aliens left.
“I said, what the hell is wrong with you, Ty? Do you want to go back to jail?” Marcy continued, to my bewilderment ignoring the actual peril we were facing. I was sure alien abduction trumped a felony.
“Why don’t we blow the aliens up?” Wes interrupted.
“We don’t blow anything up,” I said, grabbing the dynamite out of Wes’s hands. “Because I have a better plan.”

You can find Ellie hiding from aliens and other creepy things here.
Posted by Ellie Garratt at 12:00 AM 6 comments:

Are you afraid of ghosts? 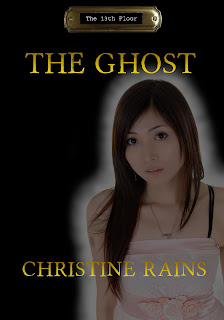 There are more terrifying things that go bump in the night than ghosts. One of those creatures has moved into Chiharo's building. She already has her hands full trying to deal with another phantom, but this monster could be the end of both of them. Can a sweet ghost like Chiharo banish a fiend that's out to eat her soul?

THE GHOST by Christine Rains is the final book in the 13th Floor series. The big release date is in four days. Please enjoy an excerpt and get hooked!

“Who's going to die?” Chiharo cupped her hands around her mouth to amplify her voice, but it didn't make a difference.

Only a fool would try a thing a hundred times and expect a different response. Chiharo had been trying the past few years to get Harriet to notice her with no success. But Chiharo had to know who Harriet's foretelling was about. Besides, the circumstances were always different. Maybe a little more electricity in the air or an alignment of the planets. One day, Harriet might hear her.

Chiharo shouted her question again as Harriet got ready to go out. The only response was the tabby cat Elli's soft growl. “You know, if you were any kind of familiar, you'd tell Harriet I need to talk to her.”

Chiharo's mother had taught her to not take any guff from animals. They needed to know who was in charge. Her mother had been dead for twenty years, but Chiharo still heeded her wise words. Still, the cats ruled here.

Harriet tripped over the other cat as she walked down the hall. She didn't cry out or groan, but picked herself up and bid a fond good-bye to the felines as she slipped out the apartment door.

From the bedroom, Chiharo sighed and shook her head. “You know you're lucky to have her. She's too good to you.”

Elli hissed, and the big gray tom named Kerr turned his back to both of them. Chiharo rolled her eyes and walked through the wall and into the corridor. She didn't flinch as she had the first few years of ghostdom. Was that even a word? Ghosthood?

Her throat tightened. What she wouldn't give to hear her mom lecture her or just to have someone to talk to. Witches were supposed to see spirits. At least that's what her mother always said. Why couldn't Harriet see her?

Though, maybe Harriet wasn't the type of witch that could see spirits. Chiharo had never seen her preform any magic. Harriet made healing potions and soothing teas. Not exactly exciting witchcraft, but it was obvious Harriet loved what she did as much as she loved singing in the shower.

“Harriet!” Chiharo zipped in front of her, but Harriet didn't slow her steps. Chiharo had tried irritating the cats and moving things, and now it was time for the next trick.

Summoning up her energy, Chiharo pushed the stairwell door and held it open for Harriet. “Hello? I'm here. I know you know you didn't open the door. Why were you screaming in the hall last night? Whose death did you see?”

Chiharo nibbled her lower lip. Stefanie came back wet, muddy, and naked last night. Was the trouble she'd been hiding from going to find her? Xan did dangerous work. Maybe a dragon would finally get him. Or that pretty reporter he stashed away in his apartment.

A squeaky noise brought her attention back. She gasped as Kiral and Harriet stood face to face on the landing.

“Oh my god!” Chiharo's hands fluttered. “This is it, Harriet! He's finally seeing you. Say something!”

Please join Christine Rains on THE GHOST blog tour from July 13 - 18. There will be a HUGE giveaway where you can enter to win the entire 13th Floor series.

You can download the first book of the series, THE MARQUIS, free for the Kindle and for all formats on Smashwords.

Mark THE GHOST to read on Goodreads.
Posted by Christine Rains at 2:00 AM 11 comments: