The Story Must Go On

Story ideas don't always like to fit neatly into one book, two books, or even five books. My world of Amora is like that. One day Yssa, the sixth Phoenix Prophetess, stepped out and started telling me her story. To save a kingdom, she must challenge Fate. Bit by bit, the story came to me. I had the story idea for Reborn in 2006, but I didn't start writing that novel until January 2009. By September 2009 (nine months, how fitting!), the first draft of Reborn was complete and my debut novel will be out in May 2014.

But Reborn isn't just one book. Yssa's transformation will take three total books: Reborn, Reforged, and Redestined. All right. I can handle that and am even writing book two's Reforged now.

As I was thinking of the last chapter in Redestined, Yssa asked Apenth (God of Prophecy) a question: Am I the last Phoenix Prophetess? He started to say no, but then Yssa--um, I mean me--had a vision of a dark-haired girl with electric blue eyes. This sixteen year old is all hard edges, but with a softness she tries desperately to hide. Her name is Kalliope, but she prefers to be called Phoenix. She's the seventh and last Phoenix Prophetess and in the next year or two, I hope to begin her story. Of course, she's not the only one telling this story. Apenth just had to have his say too. Kalli will have book one. Apenth will take over in book two, and they will share book three. 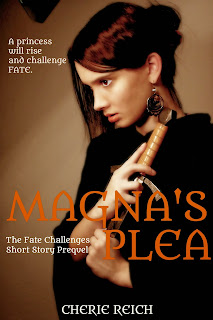 Um, not exactly. A princess stepped out from the pages. At one point, Magna opens a school of sorcery for the kingdom's Royals, but she showed me a scene of how she fought to save her kingdom against Fate and the people of Apentha. But I thought Apentha was a city within the Kingdom of Amora. She told me how they used to be unified, but then they split in two. She's working to unify them again. This idea was thankfully just a short story titled Magna's Plea, which is now available for free at Amazon / Nook / iTunes / Kobo / Smashwords / Goodreads and you read online it online at Wattpad.

One world, six books, and a short story. Done?

Not exactly. Recently another Phoenix Prophetess and princess have caught my attention. I thought the story would be from the Phoenix Prophetess's point of view, but instead it's from the princess's. Reza won't let me not tell her story how she is challenged by Fate, betrayed by love, imprisoned by chaos and how she must break free and reign in Reigned.

So one world, seven books, and a short story.

We'll have to wait and see what comes next.

Have you created a world and keep finding ways to come back to it?
Posted by Cherie Reich at 12:00 AM