A Stop by a Stormy Sensation - Alex Cavanaugh

How to Bring a Character Full Circle

When I first wrote CassaStar, I had no intensions of writing any other stories about Byron. The story stood on its own and Byron had evolved during the journey. But fans wanted more and I had to take the character beyond that point.

If you’ve ever written a series, then you know it’s a daunting task. Especially when you are following just one key character. How do you show growth? How do you reach a satisfying conclusion?

We all go through stages. The person we are now is not the same as the person we were twenty years ago. Situations change and new people enter our lives. Those things impact us, molding us into different people. (And we hope better!) Our characters need to grow in a similar fashion.

In my second book, CassaFire, I jumped ahead twenty years. Byron wasn’t the same rebellious young man that we saw in the first book. I showed his growth in maturity through a promotion in rank and a calmer, more professional demeanor. I also threw situations at him he’d not experienced, most of which revolved around a female pilot. Byron couldn’t remain in his secluded and private life any longer. He had to let go of past hurts and admit he needed more. He also had to face a personal demon and rise above the challenge.

The introduction of someone new in our lives always requires adjustment. So do new vocations. There are a lot of factors that can show a character moving forward, willing or not. Even as they change though, baggage still follows. And that gives us the opportunity to bring a character full circle.

In the final book, CassaStorm, I jumped ahead another twenty years. Byron isn’t just a pilot now – he’s the commander of the Cassan base on the planet of Tgren. He’s also the father of a ten year old boy who is experiencing nightmares. And he’s in the middle of a crisis that could destroy the ten known races.

All of those things force Byron to grow. But I went beyond that and tied in several factors from the preceding books. The force threatening to destroy them all originated in CassaFire. The solution ties in with a situation originating in CassaStar. There are many demons lurking this time. And ultimately, Byron becomes much like his mentor in the first book, not just in age but in wisdom. And he has to be willing to make the same sacrifice.

It’s not easy tying up a series with a neat bow. Even if your characters aren’t taking huge leaps in time like mine, you can still move them forward and bring them to a satisfying conclusion. Just remember the ripple effect, and how one incident can cause a chain reaction. Look for those incidents in your first tale.

And then bring your characters full circle. 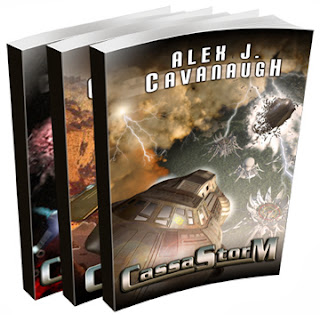 From the Amazon Best Selling Series!

A storm gathers across the galaxy…

Commanding the Cassan base on Tgren, Byron thought he’d put the days of battle behind him. As a galaxy-wide war encroaches upon the desert planet, Byron’s ideal life is threatened and he’s caught between the Tgrens and the Cassans.

After enemy ships attack the desert planet, Byron discovers another battle within his own family. The declaration of war between all ten races triggers nightmares in his son, threatening to destroy the boy’s mind.

Meanwhile the ancient alien ship is transmitting a code that might signal the end of all life in the galaxy. And the mysterious probe that almost destroyed Tgren twenty years ago could return. As his world begins to crumble, Byron suspects a connection. The storm is about to break, and Byron is caught in the middle…

“CassaStorM is a touching and mesmerizing space opera full of action and emotion with strong characters and a cosmic mystery.” – Edi’s Book Lighhouse

"Cavanaugh makes world building on the galactic scale look easy. The stakes affect the entire known universe and yet Cavanaugh makes it intensely personal for our hero. The final installment of this series will break your heart and put it back together." - Charity Bradford, science fantasy author of The Magic Wakes

Alex J. Cavanaugh has a Bachelor of Fine Arts degree and works in web design and graphics. He is experienced in technical editing and worked with an adult literacy program for several years. A fan of all things science fiction, his interests range from books and movies to music and games. Online he is the Ninja Captain and founder of the Insecure Writer’s Support Group. The author of the Amazon bestsellers, CassaStar and CassaFire, he lives in the Carolinas with his wife.