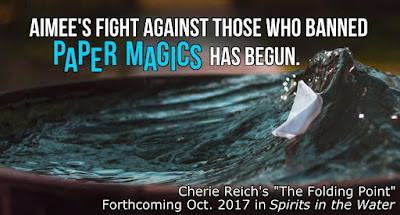 Aimee gripped the gum filled strands and sliced through them. A hint of rosemary from her conditioner and watermelon from the gum tickled her nostrils. She dropped the clump of hair into the sink and continued chopping away. The thick tresses soon filled the basin. She felt lighter with each one off her head.

“Oh god.” The peanut butter jar slipped from Xavier’s fingers and clattered onto the bathroom tiles. It rolled over to the rug she stood on. “What are you doing?”

“What does it look like?” She straightened her shoulders and smoothed a hand through her short, jagged locks. Her reflection stared back. The girl in the mirror looked pale, her lips drawn into a determined line, yet her eyes—the intense ice blue—chilled her. She almost didn’t recognize herself. “I’m taking my life back.”

Her brother’s lips parted like a goldfish’s. Open and shut, open and shut. He eventually shook his head and retrieved the jar of peanut butter. “It’s your hair.”

She gave a firm nod. Her hair. Her life. She was in control.

As he left the bathroom, she continued to cut her hair until she was satisfied with the pixie style. She cleaned off the scissors, placed them back into the cabinet, and scooped up the dark remains where she discarded them in the wastebasket.

She was heading toward her bedroom when a fluttering sound drew her attention toward her brother’s room. His window was cracked open, and a paper bird launched from the sill and flew toward her. Did her brother create the bird? As far as she knew, her dad had gathered up the last of the paper in the house and burned it after Mom’s arrest. She held out her palm.

The bird landed and fluffed its delicately folded feathers. Its beak opened, and it spat a crumbled ball of paper into her hand. Then it flew off and perched upon Xavier’s desk lamp.

What the holy folds was this about? She unfurled the ball of paper and smoothed out the wrinkles. Midnight at Cityside Park. The scrawl sent her brow furrowing.

“What are you doing in my room?” Xavier snatched her wrist as she closed her fingers around the piece of paper.

“I saw a paper bird flying around.” She jutted her chin toward the creature.

“Open your hand.” His gaze drew to her fist, and his fingers dug into her flesh. “Come on, Aimee. It’s for me.”

“What is it about?” She opened her hand, the paper in the center of her palm.

“Nothing important.” He snatched the note and released her. “Go to your room and do your homework.”

“Well, go read or something.” He shooed her off and stepped farther into his room. His hand rested upon the door. “Go on.”

She huffed and backed up.

He slammed the door and locked it.

What had him so rattled? She shook her head. Whatever it was, she would find out.

Spirits in the Water is forthcoming October 2017.
Add it to your Goodreads' to-read list now.
Posted by Cherie Reich at 5:00 AM