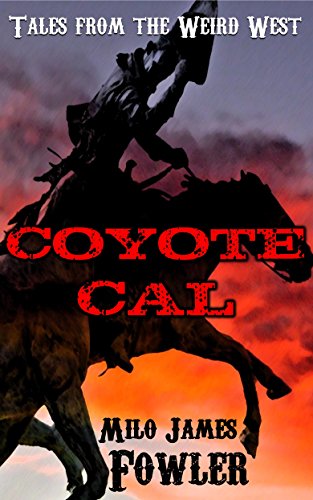 Blurb:
There’s Trouble on the Range

In these thrilling tales from yesteryear, Coyote Cal and his trusty sidekick Big Yap encounter a wizard able to change his shape at will, a scheming witch, a confused zombie, la chupacabra grande, bloodthirsty vampyres, and other sordid fiends. Our heroes will have to rely on their wits, skills, and loads of hot lead to ensure justice prevails.

This volume collects all 9 weird western stories in the Coyote Cal Adventure Series, including:

“Fool’s Gold”—Coyote Cal and Big Yap encounter their most challenging adversary yet: a Portuguese wizard able to change his shape at will. Our heroes will have to rely on their wits, skills, and loads of hot lead if they hope to foil this shape-shifter’s evil schemes before he ends them, once and for all.

“Coyote Cal’s Guide to the Weird, Wild West”—Coyote Cal must match wits with Donna "the Witch" Jamison, a master of the dark arts intent on planting him in the ground. Cal has stood toe to toe with his fair share of villains in the past—but this time, he's up against something altogether different in the form of a metal-mouthed gunslinger named Sleepy Rider and his dead brother, Easy.

“El Diablo de Paseo Grande”—Something’s attacking the livestock outside the little town of Paseo Grande, and our heroes are hot on the monster's trail. But Coyote Cal, Big Yap, and Donna “the Witch” Jamison may have bitten off more than they can chew this time, and only one of them will be able to save the day—or die trying.

“Harbinger of Arroyo Seco”—Like many heroes, Coyote Cal was once a boy... There's a storm brewing over the town of Arroyo Seco, and a sheriff with his uncanny eye on the future sees nothing but trouble for our hero-in-the-making. In love with an older woman and hunted by a gang of outlaws seeking retribution, young Calvin must walk a fine line between protecting the one he loves and becoming a ruthless killer.

My Review:
Coyote Cal is a perfect blend of horror and humor. If you grew up watching reruns of The Lone Ranger and The Cisco Kid, Coyote Cal was written for you. Coyote Cal and his sidekick Big Yap battle one supernatural enemy after another, saving the hapless citizens from horrible fates at the hands of wizards, witches, werewolves, vampires, and other monsters. The series is laughably self-aware. Big Yap frequently reminds us and all the characters that Coyote Cal is the hero of these tales. Both Cal and Yap lament the passage of the Old West into the Weird West, but ride into the new landscape without fear. In true hero fashion, Cal accepts no monetary reward for his good deeds—a sore point with Yap—but does accept a kiss or two from grateful damsels. Coyote Cal is pulp fiction fun at its best.

And, if you want to add an extra kick to the Coyote Cal experience, try the audio version. The narration is spot on and replete with sound effects which give it the feel of an old radio show.