Frozen - a teaser from Spirits in the Water 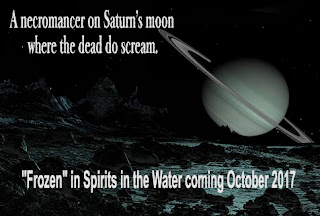 I woke in a tomb. No, a cell. Or rather, what was more like a storage closet. A single light shone over my head and seemed to illuminate the throbbing pain engulfing my face.

Raising a hand, I gingerly inspected my nose. It was swollen, but I could breathe. Someone had tended to it and set it with a squirt of bio-gel. It was not something I expected from scavengers. But if they weren’t scavengers, who were they?

I sat slowly, fighting past the dizziness and smacking my dry mouth as I tried to wet it. How long had I been out? Hours? A day? Even more so, how long would it take for anyone to realize I had gone missing? The Planetary Marshals were scarce this far out in the solar system. They might not concern themselves with a missing necromancer. Not many folks would.

My helmet and a small bucket sat by my feet. Someone had fitted me into my space suit. Had we left the colony? Carrying me across Enceladus’ slippery surface to wherever they were hiding would be a lot of work. It meant they might have a hover vessel which would get them around on the surface much easier.

The door opened with a squeak, and my attacker stood in its place. His black hair was shorn short accentuating the shadows around his eyes. His face was like a storm that wouldn’t end, battered with age and angry.

“You better be worth the trouble, Silaluk. If you don’t cooperate, I have no qualms about tossing you off the ship.”

Ship? I gripped the material of suit as I reached out with my other senses. Nothing. Emptiness. People might claim to have haunted ships, but it was their space-addled minds making them see things. Spirits didn’t exist in vacuums. They needed earth to cling to and water to move through.

I squeezed my eyes shut. Not scavengers. Pirates.

“I see you understand your situation now.” The bastard sounded pleased with himself. “I’m Captain Schrader. Call me whatever you want, but do as I say, and you’ll live through this. In fact, you could earn enough to buy yourself a something bigger than a box to live in.”

“What do you want from me?” My voice wasn’t quite my own. Schrader’s friend had done quite the number on my nose. Or maybe it was my resignation.

“I need you to do two things for me.” Schrader held up one finger. “Find a map.” He flipped up a second digit. “And help me get the goods.”

Simple words, but I highly doubted it would be as easy as it sounded. If it were, he wouldn’t need me. “So why do you need me?”

Schrader’s smirk tightened his whole face. “Because only a dead man knows the whereabouts of the map.”

Add Spirits in the Water to read on Goodreads.
Posted by Christine Rains at 12:00 AM