Ghosts of Fire (Elements of Untethered Realms book #3) is HERE!

Ghosts of Fire
Book three of the Elements series is finally out, just in time for the spooky season!
Get it: Amazon US, UK, CA, AU, DE, Google Play, Kobo, iBooks, Smashwords. (More links added when live)
See it on Goodreads 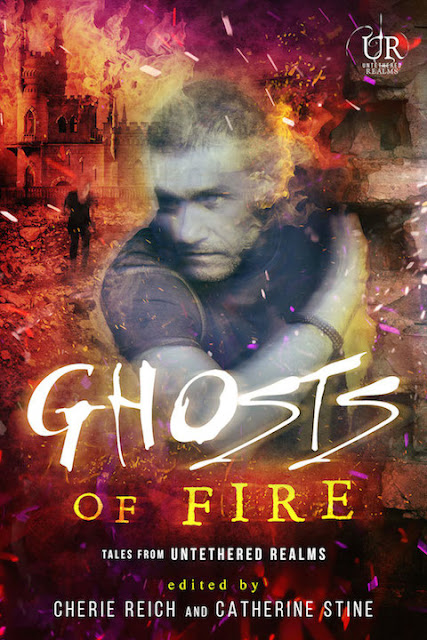 The stories:
“The Flaming Emerald” by Jeff Chapman: When Orville finds an emerald in a pawnshop, Jimmy suspects there’s trouble ahead, which is precisely what they encounter, trouble of a very weird and supernatural kind. Will they rid themselves of the cursed jewel before the flames scorch them? This is another story in Chapman’s Huckster Tales series.

“The Cost of Greatness” by Meradeth Houston: The newly elected President swears that he will rid the country of Otherkind, no matter the cost. When violence breaks out, one question must be answered: what is the cost of peace?

“On Day 168” by Cherie Reich: For 168 days, a dragon imprisoned Astryd in his cave, but the chieftain’s daughter has escaped to discover the dragon may not be her only enemy. This story takes place several hundred years before Reich’s series The Fate Challenges.

“The Vagaries of Eloise Stanton” by M. Pax: Lucy’s family disappeared when she was a child, lost in a world of mirror. No one believed her, yet the reflections of her family’s faces haunt her, plead with her for rescue. On the verge of at last being reunited, Lucy must battle the cruel woman, who isn’t quite human, standing as a barrier between the two realms.

“Mind the Gap” by Gwen Gardner: Carl James wants to impress the lovely Detective Inspector Madison Perry by helping her  catch an international art thief. Little does he know how his world will change when he steps through the ancient standing stones and finds himself an unintentional Gap Walker.

“Ryan” by Misha Gerrick: As the oldest griffon in existence, nothing thrills Ryan more than hunting down Aleria, the most powerful phoenix alive. But when the blitz traps both immortals in a struggle for life and death, he discovers she might be more than his prey. She might be his salvation. Ryan and Aleria’s stories continue in Endless.

“Rollerskate Boys” by Catherine Stine: An old shoe warehouse seems like the perfect place for artist Lily to set up a studio. But after moving in, she is tormented by startling clatters in the hall and the ghostly trails of boys on roller skates. When a deadly fire erupts, she’s no longer sure of what is real and what’s a figment of her nightmares.

“The Torchbearer” by Christine Rains: Sent to a dark crossroads by Hekate’s command, Desma must listen to the words of a handsome prophet whose ominous message mystifies her as much as he captivates her.

“In Plain Sight” by Angela Brown: Kazel and Amandine are best friends with their own little secrets to hide. When a boring study session at the library comes to a screeching halt, it forces them to put all their cards on the table and into plain sight. Readers of Neverlove and Frailties of the Bond will enjoy the return to the Shadow Jumpers and NEO worlds.

“Demon in the Basement” by River Fairchild: A man returns to his childhood home, determined to destroy the evil residing within it… or die trying.

Authors of Ghosts of Fire

Angela Brown battles in the corporate peon trenches with other minions by day and then goes home where she and her rambunctious daughter conquer dinner, dust bunnies, and homework problems together. Reading and writing are her passions. Interested readers can find out more at her blog publishness.blogspot.com.

Jeff Chapman writes software by day and speculative fiction when he should be sleeping. Fueled by dark hot chocolate, his imagination churns out dark, creepy, comic fiction ranging from fairy tales to fantasy to horror and ghost stories. There are no ghosts in his house, but it is crowded with a spouse, children, cats, and more books than bookshelf space. Visit his website at www.jeffchapmanbooks.com.

River Fairchild believes in Faerie crossings and never staying in one place for very long. Speculative Fiction wordsmith. The secret to her stories? Spread lies, blend in truths, add a pinch of snark and a dash of tears. Escape into her world. She left the porch light on so you can find your way down the rabbit hole at riverfairchild.blogspot.com.

Gwen Gardner is a paranormal cozy mystery writer who loves to plot murder from the safety of her armchair. Since ghosts feature prominently in her books, she has a secret desire to meet one face-to-face—but will run screaming for the hills if she ever does. Find out more about Gwen Gardner’s books at gwengardner.com.

Misha Gerrick lives in the Western Cape, South Africa, where she uses the gorgeous scenery as inspiration to write. Curious readers can find out what she’s reading and writing at mishagerrick.tumblr.com.

Meradeth Houston is an author, scientist, and professor. She prefers to be found at a café sipping coffee and writing. Her most recent release, Travelers, is a time travel mystery with a dash of romance. Visit her website at meradethhouston.com.

M. Pax is the author of the space adventure series, The Backworlds, and the urban fantasy series, The Rifters. Fantasy, science fiction, and the weird beckon to her, and she blames Oregon, a source of endless inspiration. Find out more and discover more reads at mpaxauthor.com.

Christine Rains is an author, blogger, and geek mom. She has four degrees which help nothing with motherhood but make her a great Jeopardy player. She has one novel and several novellas and short stories published. Her latest urban fantasy serial, Totem, brings ancient Inuit myths to the modern day world. Visit her website at christinerains.net.

Cherie Reich owns more books than she can ever read and thinks up more ideas than she can ever write, but that doesn’t stop this bookworm from trying to complete her goals, even if it means curbing her TV addiction. A library assistant living in Virginia, she writes speculative fiction. For more information about her books, visit smarturl.it/CReichWebsite.

Catherine Stine is a USA Today bestselling author, whose novels span the range from futuristic to supernatural to contemporary. She suspects her love of dark fantasy came from her father reading Edgar Allen Poe to her. She loves “bad” reality TV, traveling to offbeat places, and attending book conventions to meet her readers. Visit her website at catherinestine.com/wp.

Read about & get ALL the Elements series here! 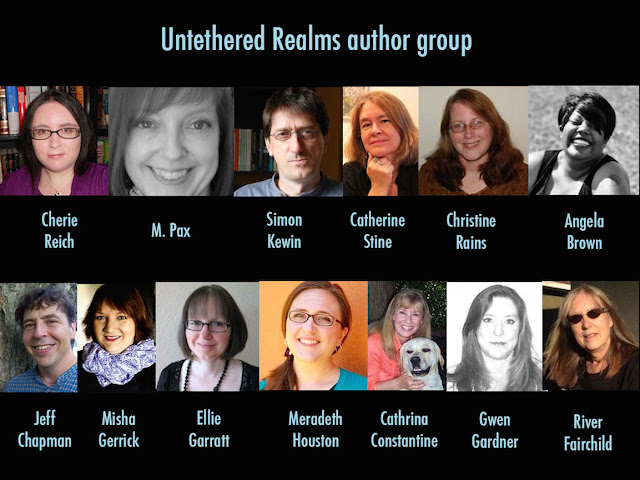 Posted by Catherine Stine at 12:00 AM