Spooky Stories from the Authors of Untethered Realms 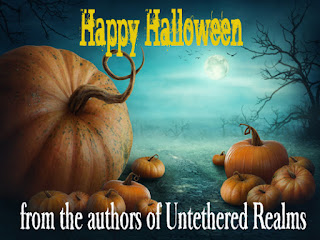 I'm one of those folks who want to believe. There are unexplained things out there, but I've never had a paranormal experience myself. I've been on ghost tours and strolled through cemeteries in the middle of the night. Nothing. Well, except...

During college, I helped a friend care for her two young sons who were nearly one and three at the time. I had an old Ouija board that we'd play around with, and my friend claimed it worked for her. Not long after, her oldest son started talking to someone who wasn't there. Kids have imaginary friends all the time, right? There were strange noises at night. But kids thump around and knock against walls. Nothing convinced me something definitely was going on other than kids being kids, but one incident did leave me wondering.

I had the youngest in my arms as I walked up the stairs to the second floor. The other boy walked in front of me. Both yammered on animatedly until they suddenly stopped. In sync, they turned their heads to the far left bedroom and looked at something unseen to my eyes. They followed it across the hall to the other bedroom. Neither of them were frightened, but I did wonder what they saw.

Well, there was this one time some friends and I were the ghosts who scared off some kids, but that's probably not very spooky. For us. *grins*

Back when I was moving to Missouri for college, my parents, sister, and I stopped at a hotel in Illinois, not far from St. Louis, Missouri. The motel was one of those typical cheap places where it is two floors and all the doors open to the outside. I had a bad feeling about the place, but we were tired. It's a long drive from Virginia to Missouri, after all, so I pushed those feelings aside.

I feel asleep rather easily, but come morning, a strange sensation flowed over me. I was between waking and sleeping. I could hear the TV on and my family getting ready for the last bit of our drive. Before I could open my eyes, I heard a deep voice saying, "I will find you wherever you go."

My eyelids flung open and I startled up. No one had heard what I did. No one in the room had spoken those words. Scariest of all, I had heard that voice once in the dead of night when I was thirteen.

Luckily, I haven't heard it since, but I wouldn't stay in that motel again.

The Whaley House is considered one of the most haunted houses in America. Built in 1857, it is located on the site of the infamous hanging of Yankee Jim Robinson in 1852, among other things. Owned by Thomas and Anna Whaley, the house has a long history of death and tragedy.

So what better way to celebrate Halloween than a real live ghost hunt in a real live haunted house? That's what my sister and I did last year. From 10:30 to midnight a handful of strangers intrepidly crossed the threshold to wander throughout this famous house in hopes of making contact with ghosties.

We learned the history of the house, which included the loss of Thomas and Anna's son, Thomas Jr., at just eighteen months old. We used EMF meters (Electromagnetic Field Meters) for detecting the presence of ghosts, EVP recorders (Electronic Voice Phenomena) for picking up ghostly voices and of course you're welcome to bring your own camera. An interesting experience, when you think about the living making contact with the not-so-dead. It was cool seeing colorful lights indicating the presence of ghosts and hearing the electronic-like voices of spirits reaching out to us from beyond the grave.

But the most interesting part was this photo taken by someone in our group: 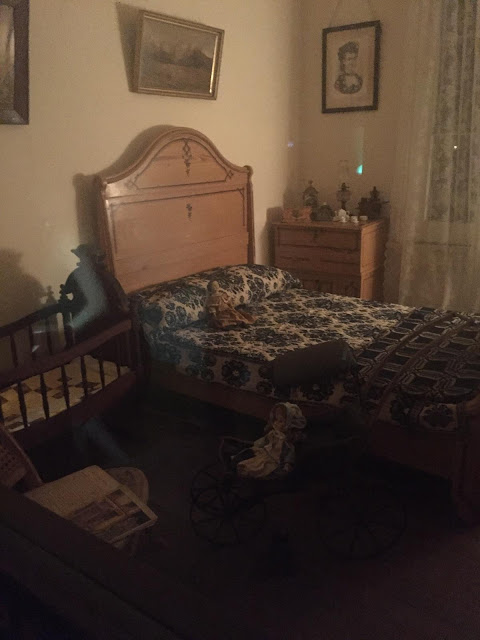 Notice the arm and body of a woman bending over the cradle. Could this be Anna Whaley, still rocking the cradle of her infant son, Thomas, after all these years?

If I had never seen a ghost for myself, I would still be a skeptic, but I did, and I know it wasn't any kind of trick. Husband Unit saw it at the same time and so as to not contaminate one another, we went and wrote down what we saw then exchanged papers. We saw the same thing.

A year ago, we went on a ghost hunt to a cemetery with a local medium and other truth seekers. The night can play tricks, so I can't say anything definitive happened. But I did hear footsteps on the gravel at one point when no one was walking and what sounded like someone knocking on a gravestone in response to a question we asked. My husband thinks this is a ghost by the tree. I'm not as certain, but you be the judge. 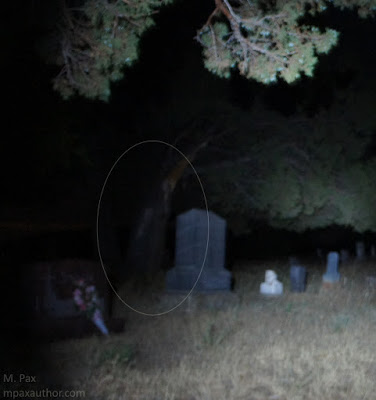 I believe in ghostly spirits and paranormal activity. My husband is levelheaded and very, very hard to convince. With that said, this is his account:

He'd been watching television late at night. As typical, he'd fallen asleep. He woke to find ~ what he calls, the grim reaper standing between the door frame. A white ghostly apparition wearing a hood and holding a harvesting sickle. Then it disappeared.

He's a man that doesn't scare easily, and it freaked him out! The next day I said, "You must've been dreaming." He's insistent that he was wide eyed and awake. If it was anyone else I'd be skeptical, but not with my pragmatic husband. I believe him.

To this day, he will recount the scene when asked.


Boo! I love Halloween. And yes, I do believe there are webs of invisible energy fields, and when someone passes, their energy lives on in some form, inside this web. That's just physics, folks--energy doesn't "die" it transforms. The night my dad passed (before I knew), I got up suddenly, went downstairs, checked the time and just then, the phone rang. When I picked it up, I heard the sound of shuffling feet. I asked who was there. No one. But I got the shivers and goosebumps all over. Then, I went back upstairs to sleep. My brother called, a little over an hour later and said my dad had died at the EXACT time I got that phone call.

Yes, it was someone's pocket dial, but I am SURE that my dad somehow had an influence in it. I have more stories like this, but I'm out of room. Here's me, below, already ready for this holiday. Can you say, Good Witch?! 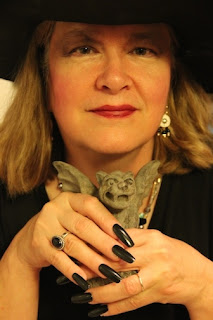