Some tackle us the moment we walk through the door from a long day at the working gig. Some provide a watchful eye on our writing productivity lazily swinging their tails to and fro while resting on top of the printer. Others insist on wording our sentences for us. Things like "shdoifhq9283yr8whetohfajsud" don't translate so well. But they are there for us. Loving on us in the middle of our doubts. Inspiring us with their antics. They are our Furry Muses. 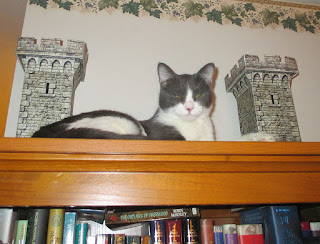 Thunder is the lord of his castle. Regal and handsome, he looks down upon us and sees all. He inspires my disinterested aristocrats, my scheming thieves, and my devious villains. Of course, Thunder is just over a year old, not much more than a kitten. He runs into things, swats at dust bunnies, and recently nearly broke a leg doing a daredevil tackle move on his cat tree. He is a young hero in the making. Not at all wise, but silly and charming. He might be able to pull off a graceful leap, but he's just as likely to tumble. He's smart enough to open cupboards and flush the toilet, but he'd be the one to try to make friends with the monster under the bed. And I think if anyone could, he'd be able to do it. 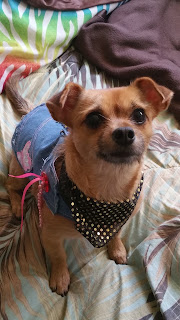 Molly is my Tiny Terror. She's a Chihuahua mixed with a ball of energy, an attention-grabber, and will have her body close to yours...only after she's sniffed you, barked at your ankles, and let you know that this is her territory and me and Chipmunk are her humans to protect. Then she's putty in your hands.

It can be interesting getting the writing in, especially if I'm chilling in my bed. She wants to be right there in my lap. Which can be hard since that's where I need my laptop. But we tend to reach a compromise after a few hugs and she settles for being by my side. At two years old, fourteen in dog years, she keeps me on my toes about the angst of youth and the subtle ways in which we all yearn to be seen, heard, and loved. 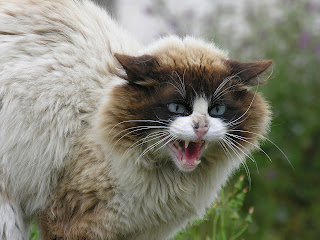 My ideal imaginary cat would be fierce-looking, ready to attack anyone I didn't like with his ability to breathe dragon fire. He would be a lovable furball around me, though, curling up in my lap anytime I wanted attention. He wouldn't leave hair on my clothes or cough up hair balls. Alas, it's the other way around, but he would go on letting me believe in my delusion of the chain of command. 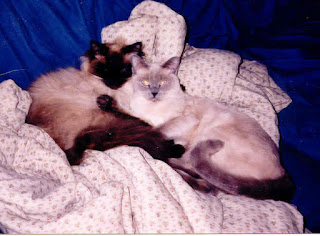 Karenina (Nini, the seal point) and Makayla (Kayla B, the blue point) moved in with me when they were 7 weeks old in January 1997. We lost dear Nini this past July, but Makayla recently celebrated her 19th birthday. With catnip, of course.  Nini was always the happiest of kitties, bouncing into rooms with joy, loving to play and snuggle up until her final days. She was so full of life and often hung out on the corner of my desk. From her, I learned to read well for a crowd. If I wasn't animated enough, she 'd go to sleep. If I was animated, she'd listen intently. Kayla is starting to lose her sight, but she's happy enough. Somehow we find ways to spoil her worse by the day. She usually hangs out behind me (she is right now) on an ottoman. She used to toss puffy balls into the air and flip around to catch them. We all spent many hours together playing ribbon and blanket monster. Makayla especially loves to be flown around the house. The two of them made me laugh daily. There is much Kayla doesn't do anymore because of her age, but she still makes me smile every day. Thank you, Kayla. Thank you, Nini. We miss you, Nini. Every day. 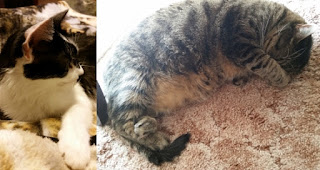 Cinderella "Relli" (pictured left) appeared at our house when she was around four weeks old. Of her litter, she was the only one we kept. I couldn't birth a daughter more like me than Relli. We have our anxiety issues and weird behavior, but we're the sweetest things when we feel comfortable with someone. Relli teaches me it's okay if I don't have my characters figured out in the first draft. I'll get to know them more each time we meet. For a muse, she says I need to put the laptop away. It's blocking the best seat in the house.

We rescued Romeo (pictured right) when he was around three weeks old. His mother had either died or abandoned him, and his siblings died in a fire. The poor little kitten was singed and reeked of smoke and oil, but he promptly adopted me as his mommy. Romeo reminds me I should speak up more, even though I'm typically rather quite--until I become comfortable around you. He's my shadow chaser. We're an adorable awkward pair. 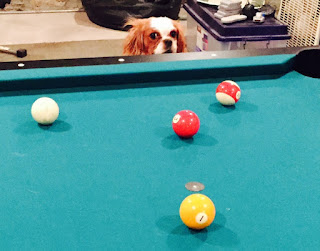 Bo, otherwise known as Heironymus Redneck Bosch is actually my older son's dog, but I "babysit" him a lot. He's half King Cavalier and half Cocker Spaniel. Here he is eyeing our pool game, and angling on how to get a play in.

I can get writing done if I give him a nice pig ear or chew bone. Otherwise, he tries to distract me. But he is a great lapdog, so on cold winter nights he functions well as a heating pad while I watch TV. 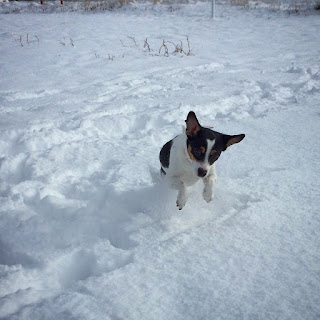 Hi! This is my first post as part of this awesome group, so it's even better to get to share a bit about my little Kate :) She's a rescue from California and is now learning how to love the snow in Montana with me. I think she's part rat terrier, with probably some chihuahua thrown in for good measure.

She's quite the attention hog, to be honest, and gets mad when I start typing and not paying attention to her. But if I'm lucky, and can wear her own with a long walk and romp with her doggie friend around the corner, she curls up next to me and lets me tap away on my keyboard. She'd very sweet, super protective, and loves nothing more than to be on my lap getting a belly rub. I love this little pup! 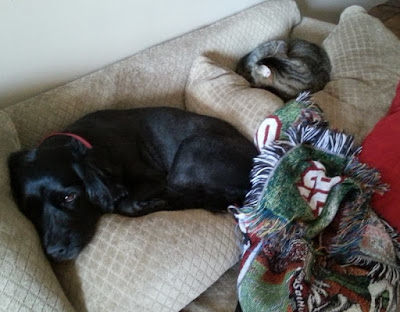 Clancy (the dog) and Nate (the cat) are my furry babies. They are both 8 years old and were born about a month apart in the fall of 2007. I adopted Nate from an animal shelter in January, 2008 and brought Clancy home from a local dog rescue on Labor Day weekend of the same year. I couldn't have picked better companions! They were both featured in my first book Polar Night when I named a character Nate Clancy. I couldn't resist. :)

My favorite writing space is my couch and as you can see Clancy and Nate are also fans of this piece of furniture. I'm lucky they are willing to share it with me. I stretch out with my laptop on my legs and these two take their respective spots on the cushions. I've spent many happy writing days with these guys and I look forward to many more. 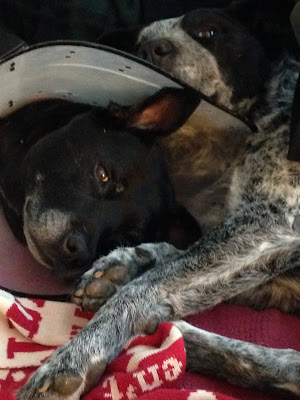 This is Koko and Tuffy. They are pitt-mix and perhaps queensland heeler. They are very talented at laying around, as you can see. But they're very smart! Their vocabulary is extensive so we've taken to spelling things we don't want them to understand--they're beginning to learn to spell, so I don't know what we're gonna do.

Koko "Puff" and Tuffy are brother and sister (littermates) and turned ten years old last summer. Koko, on the left, rules the roost. Tuffy is the strong silent type and always defers to her, even though he's bigger and stronger than she is. He even attacked a chainsaw to save his daddy once when he was one year old (see that white spot above his lip?), but he would never face down the fearsome Koko. She's way tougher than some ol' chainsaw.

They're both known to lend a paw when I'm trying to work. One time, Koko wrote forty-three pages before I noticed. 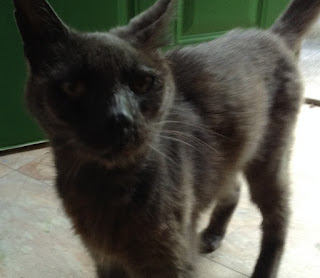 Smokey is a rescue cat. My family rescued her when she showed up in our driveway one September Saturday afternoon and tried to come in the breezeway. She was meowing, begging for some TLC, and so friendly. For a few weeks we had been seeing this small gray cat around the neighborhood, mostly at night or at a distance. Try to judge the details of a gray cat in the dark. Today she was in front of us. No doubt that this dirty, bag of bones was sick and starving. She ate some dry and canned cat food as if she hadn't eaten in months, which was probably close to the truth. After a trip to the emergency vet, we learned that she was dehydrated, had no microchip, no terminal illnesses, no front claws, two missing canines, millions of fleas, and two infections: upper respiratory and eye. For the next two months, Smokey lived in our breezeway while we nursed her back to health with antibiotics, regular meals, and a safe place to sleep. We also learned that Smokey is deaf, probably from a horrid case of ear mites.

When I needed a model for an ancient cat for a novel in progress, I looked no further than Smokey. This cat may have been around the block a few too many times, but she now has a home and a place in literature.

This was my late father-in-law's dog, Sam. Whenever he went on holiday, Sam became my dog. He wasn't the brightest dog I've known. Jack Russells are stubborn and difficult to train, and he always lived up to that reputation. You couldn't play fetch or teach him tricks. However, he never left my side and was quick to move into guard mode whenever we were approached by a not-so-friendly dog. I loved taking him on long walks, and not just for the fresh air and exercise. It was because while walking, I could switch off from all concerns and think about whatever writing project I was working on. There were no distractions other than keeping an eye on Sam, which meant my creative side could take over. I had numerous story ideas and plot breakthroughs on those long walks.

I wish I could have my own Sam now. Unfortunately, working long hours prohibits it. For now, I'll dream of a day when I can have another Sam in my life. I hope I don't have to wait long.
Posted by Christine Rains at 12:00 AM