Just Another Day in Purgatory

Death and Chronos are pleased to announce the launch of their new novella, Just Another Day in Purgatory. 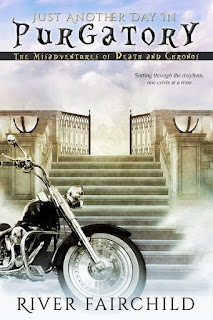 What’s the book about, beyond the wacky fun and crazy misadventures of our fearless duo? It’s about friendship in the midst of insanity. Trying to find order in the middle of chaos. Living life on the edge and having fun while doing so. It’s about having someone’s back, no matter what.

Hell freezes over. Heaven heats up. A resort springs to life on the banks of the River Styx and souls don’t want to move on.

Nothing scares our intrepid immortals—except a run-in with a scissor-wielding Fate after messing up the Great Tapestry. She’s the only one capable of cutting their Life Threads.

It’s just another day in Purgatory for Death and Chronos as they sort through the mayhem and keep the universe from spinning out of control. Be sure to bring along your helmet. You never know when Death might offer you a ride on his Harley.

A towering wall of ice loomed before them, rising from the road with a suddenness that left little time for Death to react. The bike slid sideways for a gut-wrenching moment before stopping just short of pinning their bodies against the frozen behemoth.
“That was close.” Chronos dismounted on legs gone rubbery by the near miss.
“Hm.” Death tapped his metacarpals against the ice. “It’s not cold. It’s—”
“—Gaia.” Chronos forgot to breathe after the name passed through his lips.
“We’d better get out of here. Use your hourglass to take us to Hell.”
“But we didn’t do anything,” Chronos protested even as he yanked the object from his belt.
“I know, but do you want to try explaining that to her? Better to fix the problem first and explain later.”
Chronos twirled the hourglass in his hand. Nothing happened. A fierce wind howled from behind the wall.
“What’s wrong? Will you please hurry before Gaia decides to turn us into garden gnomes?”
“The weather’s affecting it. It’ll take some time to reset.” Chronos fumbled with the instrument as the wind tried to snatch it out of his grip.
“I think we’ve run out of time.”
Death’s words hung in the abyss as Chronos managed to whisk them away from Purgatory and into Evil’s domain. Smoke swirled around them like scented fog. The chill air felt foreign in this place, normally so warm it bordered on steamy.
“Are you going to fix this?” A disembodied voice boomed from the shadows before its owner appeared. Lucien stomped into the room, teeth threatening to chomp through the cigar clenched in an unsmiling mouth.
“But we didn’t do anything.” Chronos sighed. The day hadn’t improved at all.