Fantasy Uprising is now out! 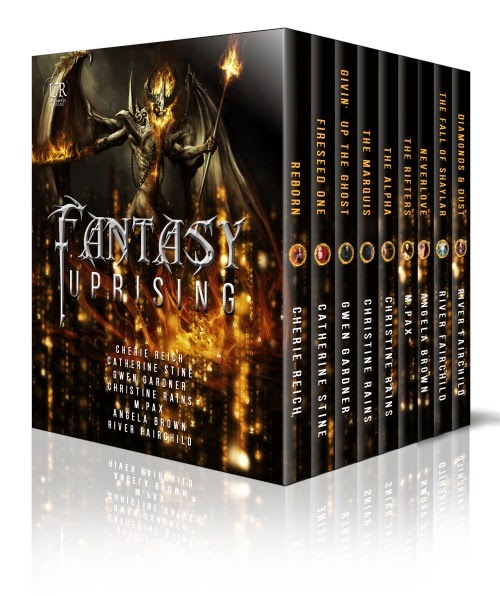 A collection of nine fantastic, spine-tingling stories. Magic. Mystery. Murder. Heartbreak and Hope. Defeat and Victory. The incredible and Horrific. Fantasy Uprising delivers a heaping serving of the best in fantasy.

Available for a mere 99 cents in ebook from:

Find it on Goodreads

Reborn by Cherie Reich: To save a kingdom, a prophetess must challenge Fate.

Fireseed One by Catherine Stine: On a devastated Earth in 2089, the son of a famous marine biologist must travel to a lethal hotzone with his worst enemy who helped destroy the world’s food source, to search for Fireseed One, a mythical hybrid plant that may not even exist.

Givin' Up the Ghost by Gwen Gardner: In the haunted modern day medieval village of Sabrina shores, indigo eady must help a ghost solve his murder before she and her gang become the next victims.
The Marquis by Christine Rains: A retired demon must become the beast he loathes to save the woman he loves.

The Alpha by Christine Rains: A werewolf hunted by her pack must find a way hide or fight a battle she believes she cannot win.

The Rifters by M. Pax: In a strange wilderness town, a misplaced city gal must deal with a secret organization, a man from 1888, and a head-stealing phantom to save her missing sister.

Neverlove by Angela Brown: A tormented suicide survivor must find the power in her pain or risk the Devourer robbing her of a second chance to live, a first chance at love, and her very soul.

The Fall of Shaylar by River Fairchild: Magic is real. So is betrayal. Rivalry, jealousy, a desperate attempt to grab the magic of Shaylar—all converge to bring about the end of the precarious balance between the Five Kingdoms.

Diamonds & Dust by River Fairchild: Magic is real. So is betrayal. Two heirs. A Kingdom of dust on a troubled world. One might resurrect it. One might destroy it all.