Book Confessions: what's the weirdest book you read this year? 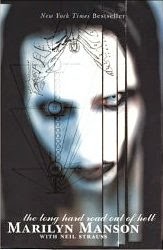 I thought it would be fun to do a post on a book I've read which I would normally not talk about. You know, kind of the equivalent of how you love certain sappy pop songs but you'd never, ever admit it?
Okay, here goes ... confession time. I just read Marilyn Manson's The Long, Hard Road out of Hell.
Why, you ask? Well, I'm not a fan.

Except that I was unexpectedly impressed with his acting in Sons of Anarchy (sans makeup). He plays a white power gang leader, and he is suitably evil, yet suprisingly deep and relatable. Then, I somehow stumbled upon the memoir. And devoured it. He's a darn good writer and he's hilarious in a gallows humor way.

He had a horrible childhood. No, I mean, really. He was traumatized by his grandfather of all people. He used to sneak down into his grandfather's workroom, and find disgusting stuff there no kid should ever, ever find. And of course the memoir gets really hard-rock-ish over-the-top. But then, Marilyn has realizations, and transformations, and, when it comes down to it, he's a serious, devoted performance artist who takes big risks.

In terms of spec fiction, you could read him as a prince of Darkness, a quick study of a twisted, tortured antagonist. My husband, was absolutely appalled that I was reading the book, and even entertaining the thought of attending his upcoming concert.

Okay, that was an embarrassing confession, yet cathartic. Because normally I read books about witches and magicians and ... Well, hey, is Marilyn Manson really that different?

Now, it's your turn! Which book have you read this year that you absolutely cringe to admit?!
Posted by Catherine Stine at 11:29 AM