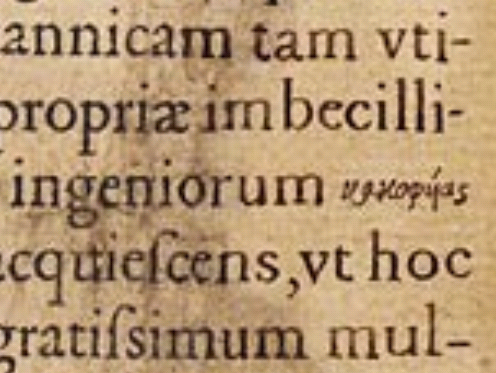 It was a dark and stormy night; the rain fell in torrents—except at occasional intervals, when it was checked by a violent gust of wind which swept up the streets (for it is in London that our scene lies), rattling along the housetops, and fiercely agitating the scanty flame of the lamps that struggled against the darkness.

Or this one from Tristram Shandy, by Laurence Stern:

I wish either my father or my mother, or indeed both of them, as they were in duty both equally bound to it, had minded what they were about when they begot me; had they duly consider'd how much depended upon what they were then doing;--that not only the production of a rational Being was concerned in it, but that possibly the happy formation and temperature of his body, perhaps his genius and the very cast of his mind;--and, for aught they knew to the contrary, even the fortunes of his whole house might take their turn from the humours and dispositions which were then uppermost;--Had they duly weighed and considered all this, and proceeded accordingly,--I am verily persuaded I should have made a quite different figure in the world, from that in which the reader is likely to see me.

You will notice that, despite the capital letters, there are colons and semi-colons separating the words, not periods. By the time I got to the end of it, I’d forgotten what he was talking about.

How about Raymond Federman’s opening line from Double or Nothing:

Once upon a time two or three weeks ago, a rather stubborn and determined middle-aged man decided to record for posterity, exactly as it happened, word by word and step by step, the story of another man for indeed what is great in man is that he is a bridge and not a goal, a somewhat paranoiac fellow unmarried, unattached, and quite irresponsible, who had decided to lock himself in a room a furnished room with a private bath, cooking facilities, a bed, a table, and at least one chair, in New York City, for a year 365 days to be precise, to write the story of another person—a shy young man about of 19 years old—who, after the war the Second World War, had come to America the land of opportunities from France under the sponsorship of his uncle—a journalist, fluent in five languages—who himself had come to America from Europe Poland it seems, though this was not clearly established sometime during the war after a series of rather gruesome adventures, and who, at the end of the war, wrote to the father his cousin by marriage of the young man whom he considered as a nephew, curious to know if he the father and his family had survived the German occupation, and indeed was deeply saddened to learn, in a letter from the young man—a long and touching letter written in English, not by the young man, however, who did not know a damn word of English, but by a good friend of his who had studied English in school—that his parents both his father and mother and his two sisters one older and the other younger than he had been deported they were Jewish to a German concentration camp Auschwitz probably and never returned, no doubt having been exterminated deliberately X * X * X * X, and that, therefore, the young man who was now an orphan, a displaced person, who, during the war, had managed to escape deportation by working very hard on a farm in Southern France, would be happy and grateful to be given the opportunity to come to America that great country he had heard so much about and yet knew so little about to start a new life, possibly go to school, learn a trade, and become a good, loyal citizen.

Obviously, I must prefer shorter openings, since these made the list of American Book Review’s 100 Best Openings!

So what makes for a great opening line? The variety of opinions matches the number of readers, naturally. We all have our favorites, opening lines which keep us riveted to the page. Share your favorite opening line in the comments below. Vive la difference!
Posted by River Fairchild at 12:00 AM