How Nerd Am I... More or Less Than You? What Do You Own That is Unmistakably Nerdy? 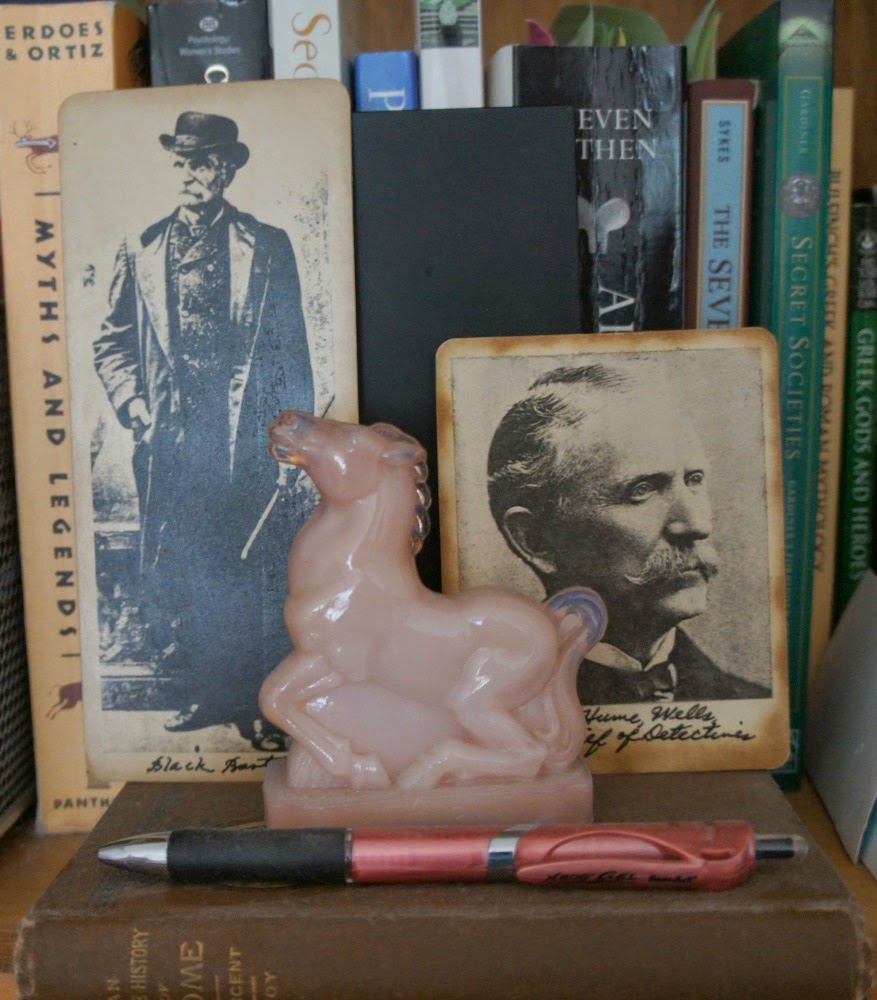 A collage of nerd: the pen Ursula K. LeGuin used to sign my copy of The Left Hand of Darkness, an antique volume of An Outline History of Rome, an antique photo of Black Bart and the man who caught him, James Hume (who surprisingly looks a lot like Bart), they're being propped up by my black monolith action figure - yes, a black rectangle I paid for. The pink milk glass horse is from my late sister-in-law, not so nerdy I guess. The books behind the collage are. Go me! 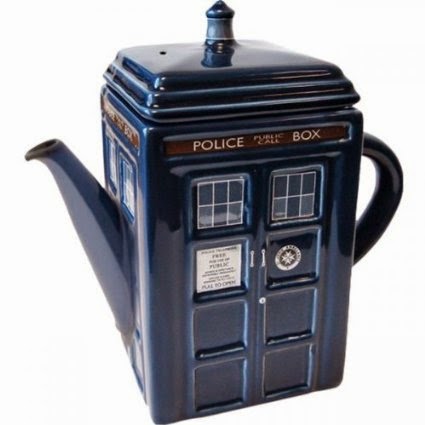 Instead of showing you what I currently own (and being temporarily without a camera) I proudly bring you my Next Nerd Thing To Own - a Tardis teapot! Who could resist? They have a cute little Tardis tea infuser to match it, too! 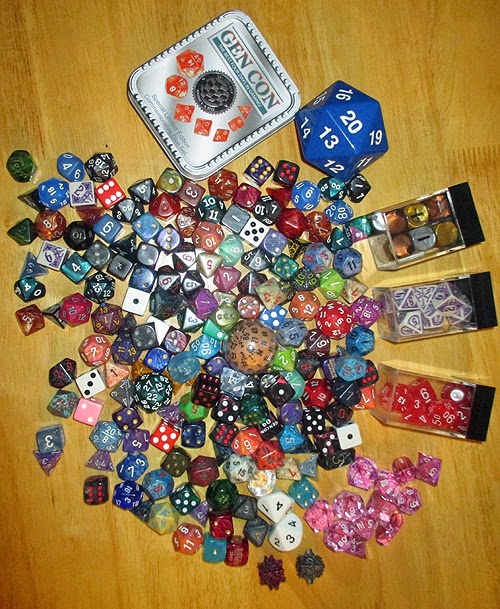 Dice. More precious than jewels. The classic D20 in large and tiny sized. Also the rarer 3-sided and 30-sided. Plus a 100-sided in the middle there. A set of fudge dice. A set of rune dice. The pink set is precision cut which make them the most accurate dice. Plus the sharpest! One of my many Gen Con sets. Metal and crystal dice. To top that off, I believe my husband and I own as many gaming books as we do dice. 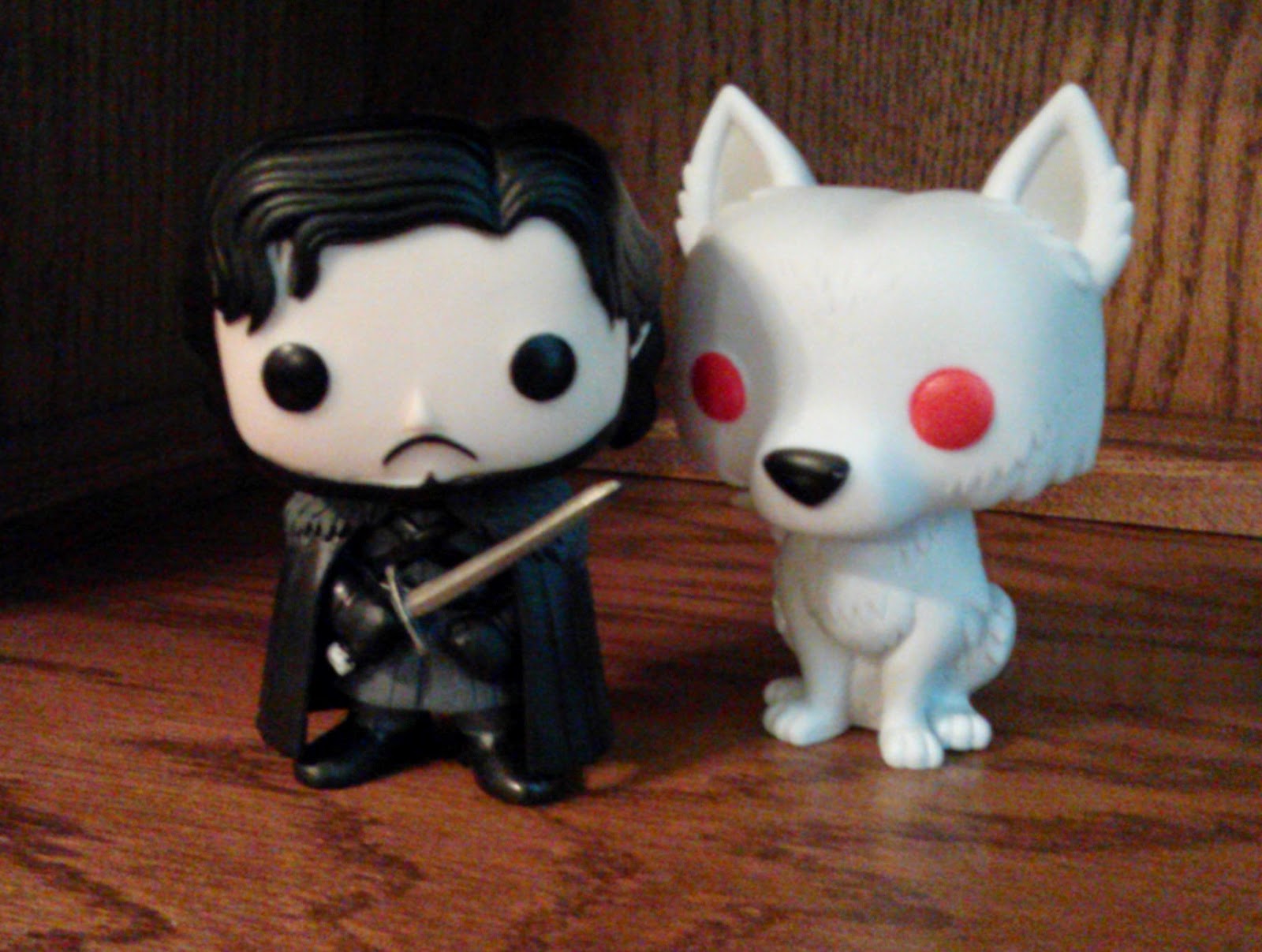 I love Game of Thrones. And as much as I love the tv show, I love the A Song of Ice and Fire books even more. Some may say I'm obsessed. They wouldn't be wrong. I'm happy to have my favorite characters Jon Snow and his direwolf Ghost as my housemates. How nerdy am I? I was so thrilled when I learned Funko would be putting out a Ghost figure that I pre-ordered him two months before he was even released. 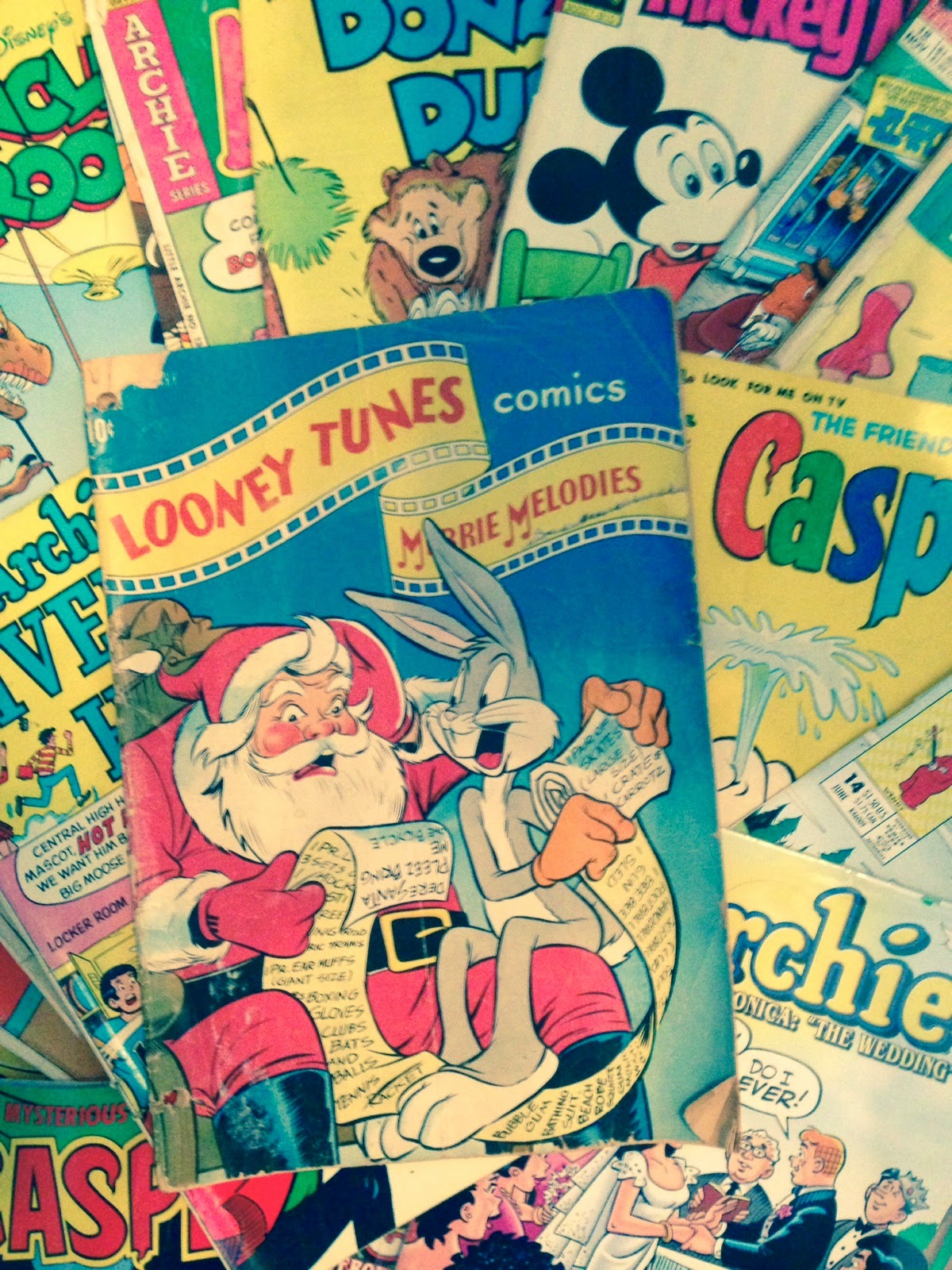 Childhood comic books. Of course my most prized one is in the middle. Looney Tunes Merrie Melodies with Bugs Bunny sitting on Santa's lap with his wish list. January 1949 with an original price of .10 cents. I'm not quite that old, though. In the late 1960s when I was a young girl, I was walking past a barbershop with my grandmother and spotted the comic book through a window, laying on a table of magazines. Since I was an avid comic book reader, Grandma went in and asked the barber if I could have it and he said 'yes.' It was hard to say no to Grandma in those days--or ever. Alas, I don't own any of the superhero comics that were cool and might be worth something these days. Nope, I adored Casper, Wendy, Archie, Mickey Mouse, Donald Duck, and Porky Pig. 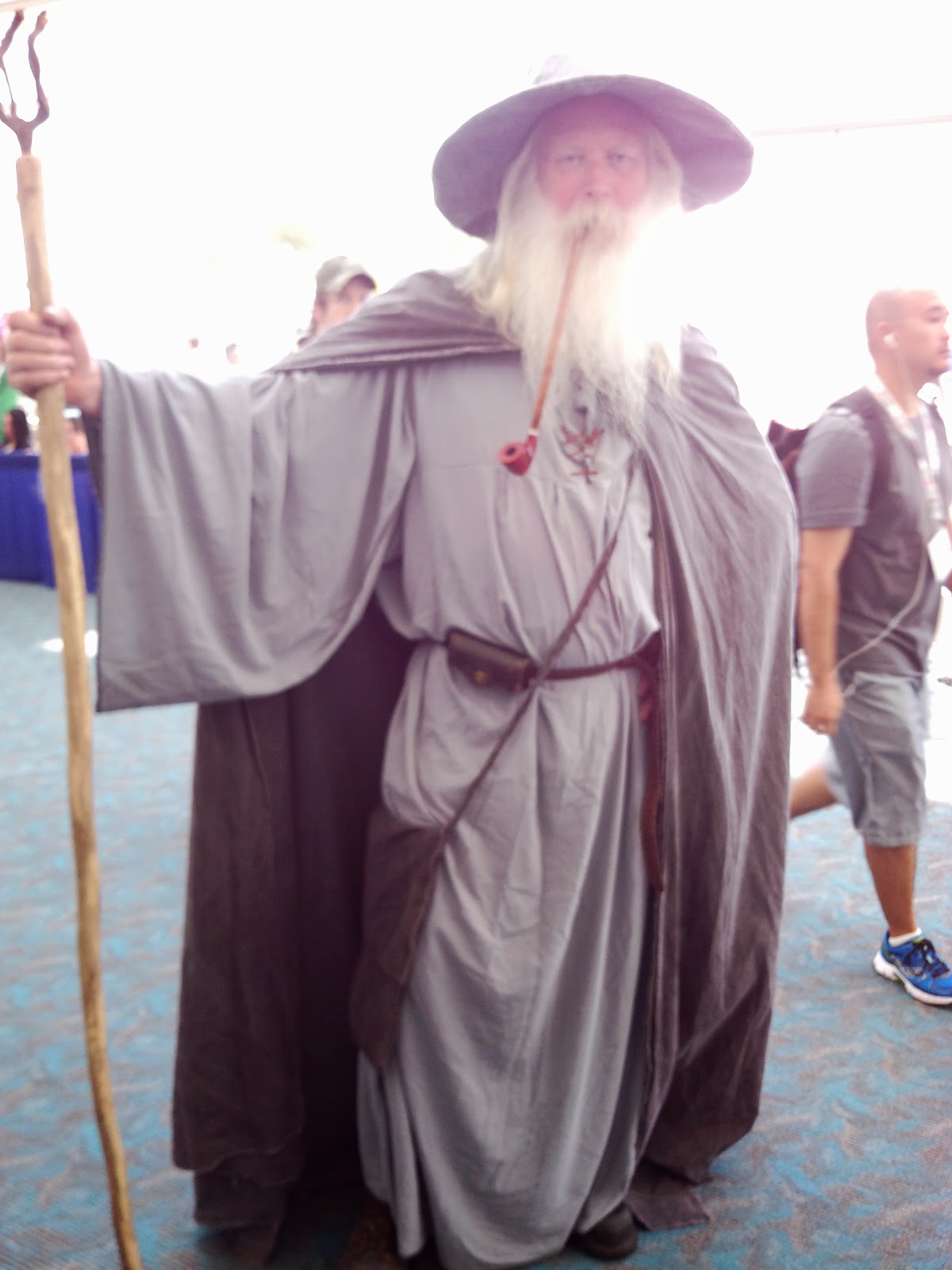 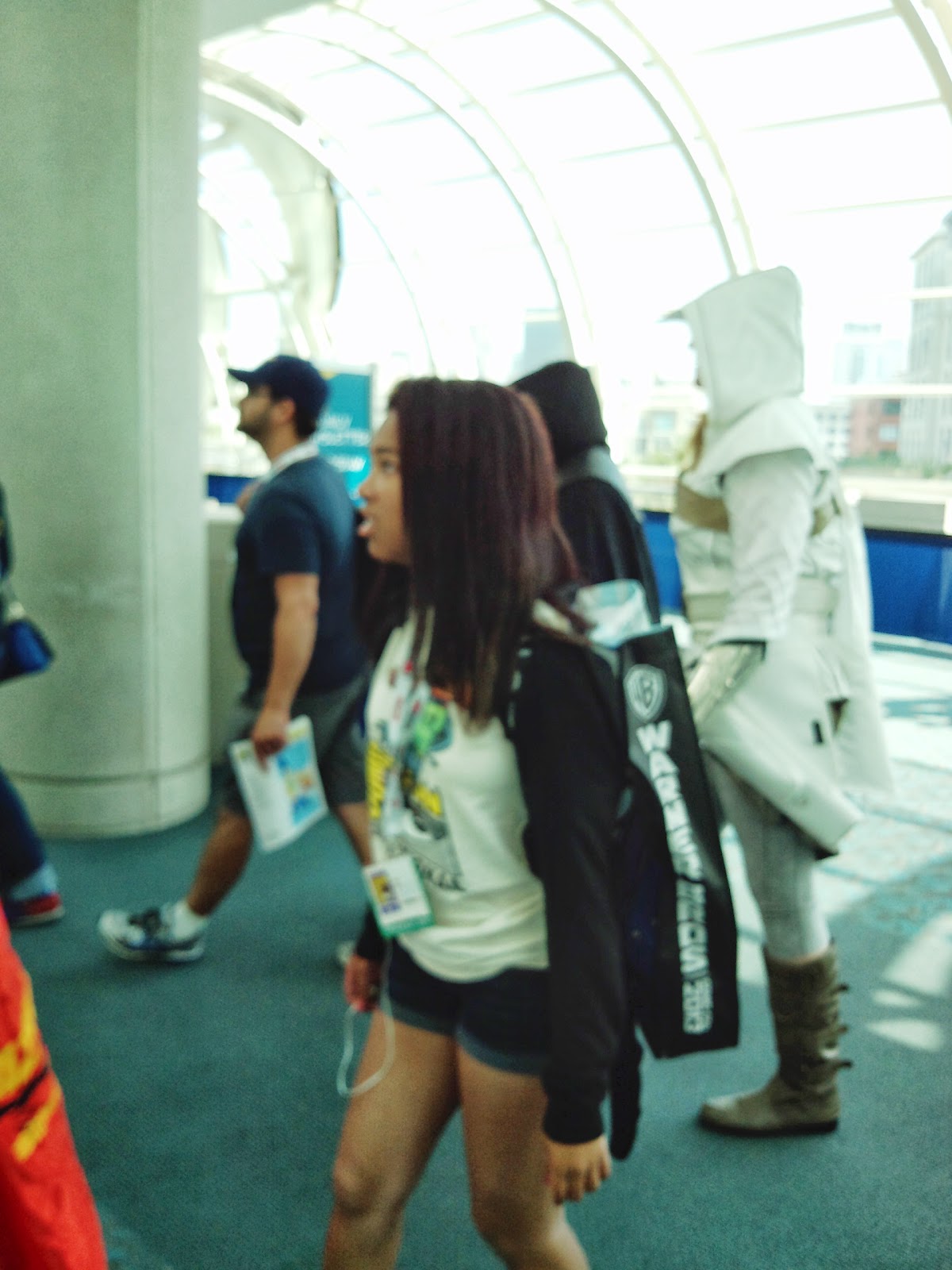 Comic Con in San Diego goes down every year. It started and remains a nerd's paradise, though mainstream writing, movies and the such have made their way into it, turning it into a humongous convention attended by hard core nerds, gamers, cosplay lovers and so much more. I have multiple pics that I cherish, but I wanted to share Gandolf because he just rocks and the second one for the bag...the one the young lady proudly displays on her back. I have one of those as well, though Blogger didn't seem to like the picture of mine -_- 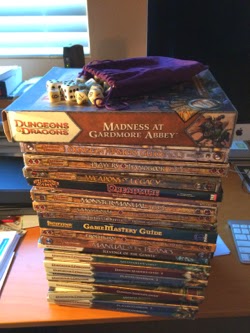 I had a tough decision deciding which of my nerdy things to profile, but the choice had to be my collection of D&D books. Myself and friends embark on nerdy quests around the dining room table every Friday; an occasion my wife labels as "Nerd Night."

I'm obsessed with pigs (and hedgehogs). I've had two Vietnamese potbellied pigs as pets (sisters--for 15 years), and I owned a regular ole pink pig long ago in Philly until my boss bought him for Thanksgiving dinner after police came to my place and said it was against city ordinance to have a pig in the city. Now I collect various pig statues and baubles. Here are a few. Don't judge. 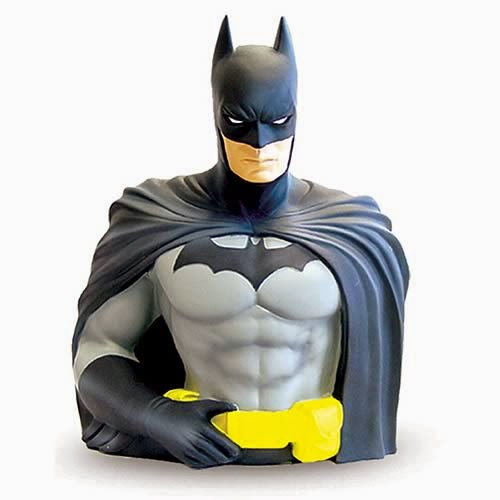 The only place I really trust with my money: my Batman bank. And considering how many pennies it has in there, it would pack one major punch. I've been in love with Batman since I saw Michael Keaton as Batman, and I can never get enough from the books, comic books, TV shows, and movies. Yes, I even make sure I can watch The Justice League on Saturday morning cartoons too.

My collection of Spocks. I'm a life-long Trekkie, having discovered the series as a child during the late 1970s. Spock is my favourite character. I love his logic. I have a much larger Spock model, but he was too big to go in the photograph with the three above. He stands on the floor next to my television.

What is your nerd thing? Do you collect anything?
Posted by M Pax at 12:00 AM

Email ThisBlogThis!Share to TwitterShare to FacebookShare to Pinterest
Labels: how nerd am I, nerdy, Untethered Realms