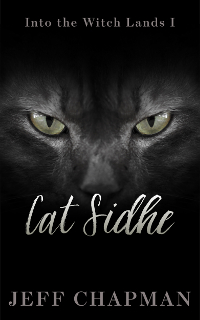 Cat Sidhe: Into the Witch Lands I

Cat Sidhe is the first in a trilogy of novellas. Merliss the cat, the protagonist from "The Water Wight," is back for more supernatural encounters.

Something nasty has come through one of the ley gates. It walks upright. It talks. And it looks like an oversized cat, but as Merliss can attest, it doesn't smell like a cat. The cat sidhe is on the hunt for slaves, someone with opposable thumbs. Merliss travels to unknown territories to rescue Saerwynn and encounters more trouble making her way home. The situation is far more dire than Merliss and her friends could have imagined.

A gust whistled through the crevices between the rocks. There was a ley here, but not one Merliss travelled. It linked to a network far to the northeast, in a cold, rugged land of steep hills and valley streams.

A pulsing blue pulled Merliss out of the hunt, pushing all thoughts of the vole aside. The runes around the ley's arch glowed with the sharpness of the day of their carving and then faded to the faint scratches of today. Her whiskers twitched. The air crackled with the energy of a lightning strike. The ley was active. Someone was coming.

From time to time an unwitting animal leapt through a ley in just the right way to activate it. Merliss considered the strange smelling vole. Leys were only active when the sun warmed them. Fog or heavy cloud cover made them dodgy. But such accidental ley leaps were rare. Ley arches hummed with enough energy to ward off animals and even people. The folk living on the moor called them ghost stones. Merliss didn't have enough paws to count the times she had seen someone alter their path to avoid passing near a ley.

Merliss's eyes grew wide and as bright yellow as gorse flowers. The runes pulsed with more energy, no longer fading. To a magical creature's heightened senses, the ley buzzed with the roar of a thousand swarming bee hives. Merliss ran to Saerwynn's side. Blissfully unaware of the ley's activity, the girl tucked the wrapped flower in her satchel, exercising the same care she would give an egg.

"We've done alright for ourselves, we have. A full day's work and hardly half the day gone amiss. Master Fendrel will be pleased, eh?"

Merliss turned her back on Saerwynn to face the ley. Her tail twitched, audibly thumping the ground. The hairs along her back rose as stiff as yew needles. A growl vibrated in her throat. The hill trembled. The vibration crept through the pads of her paws. A ley's disruption was proportional to the distance traveled. This one spanned hundreds upon hundreds of miles.

"What's gotten into you, cat? Just a pile of weathered old stones." Saerwynn's smile twisted. "You don't smell an adder, do you?" She gazed at the base of the rocks, searching for the long, thick body of a viper.

Blue light flashed amidst the stones, wrapping round the edges like a blooming pimpernel of flame.

The flash was blinding. Merliss squinted and turned away, saving herself from an eyeful of blind spots by the breadth of a whisker. When she turned back, a yowling, black ball of fur and legs bounced out of the ley. It unwound as it rolled across a waste of rock chips, scattering them like splashed water with each bounce. When it came to rest at the edge of the summit, it possessed all the appearance of a monstrous black cat with a head as big around as a man's, yellow eyes rivaling walnuts, and forelegs stretching three feet.

Merliss hissed through bared teeth, spittle bubbling round the edges of her mouth. Her back arched. Instinct insisted on a show of ferocious force. Instinct also counseled running, but for now Merliss planted her paws and leaned into another hiss. She chanced a look at Saerwynn.

The girl stood silent, her mouth gaping, as dumb as a dead songbird. A rock would have danced a livelier jig. Was the girl already bewitched?

The black creature peered at them down the length of its belly. Shimmering black fur, slick as a seal skin wet with oil, covered the creature's body except for a patch of white on its chest, like the chink in a dragon's armor. Inch long claws sprang from its flexing forepaws. Yellow eyes twitched between Merliss and Saerwynn.

The creature clambered onto its hind paws, bringing its head a mere hand below Saerwynn's full height. The tip of its ragged tail brushed the ground. The white patch on its chest rose and contracted with the beat of the creature's heart.

"What, what is it?" sputtered Saerwynn.

Merliss knew exactly what this was. A cat sidhe. A dark witch shifted into a cat-like form. Had the witch done it for the ninth time and stuck herself? What a time to lack speech.

The cat sidhe stretched its arms and rolled it head. Its neck popped and cracked.

Merliss loosed a long, mournful cry. The sunny afternoon darkened. Merliss kept her gaze locked on the cat sidhe's chest, careful to avoid staring into its eyes. To lock gazes with a cat sidhe would grant the monster power over one's soul. Merliss crouched and backed closer to Saerwynn. When a hind paw brushed the girl's staff, the cat thumped it with her tail.

"Prrettyee," said the sidhe. It's tongue wrapped clumsily around the word gurgling up from it's throat. The creature sniffed. It's gaze directed at the satchel. "Willow. Gatherring ingrredients, arre ye?"

The sidhe's gaze returned to Saerwynn. It stepped forward. With its forepaws reaching toward Saerwynn, the sidhe bobbed on hind legs in a herky-jerky motion. If not for its sharp-toothed grin, the exaggerated tip-toe gait would have been comical. The sidhe tilted its head from side to side. Drawing Saerwynn's attention to the eyes, thought Merliss.

"Stop!" Saerwynn took a step backward and stretched her arm to tap the rock pile. "Who are you?"

The eyes, thought Merliss. Don't look in its eyes. Merliss could not talk to Saerwynn, but she could talk to a creature of magic. "Back off!"

The sidhe jerked its attention to Merliss and stared hard at the crouching cat.

Merliss felt the power behind the eyes like a heavy hand squashing her into the dirt. She whacked the staff with her tail, ignoring the pain shuddering up her spine.

"What arre ye?" said the sidhe, all the syrupy sweetness drained from its voice.

"You don't belong here. Go back!" Merliss ended her command with a hiss.

"Hmm," said the sidhe. "Interrresting. What does ye call yerrself?"

"I'm--" Saerwynn apparently thought better of giving away her name. She snatched up the staff to Merliss's relief and thrust the silver point at the black creature.

The sidhe yowled as it stumbled backward, flailing its forelegs. Fleet as a cat, the creature recovered its balance in an instant and stood where it had begun.

"I've got a teacher. And he's no flea-bitten fur bag, so back with you. Back to the pit where you crawled from." Saerwynn jabbed her staff at the creature, rocking it back a half-step, her confidence rising like a flood in a gulley.

Merliss marveled at the girl's confidence. Was this the Saerwynn who complained of walking up a hill? Perchance she was finally coming into her power, living up to her potential. The thirteenth daughter of a seventh son could have a wild power if caught and groomed. A powerful healer could emerge from an ugly cocoon. Maybe Fendrel had chosen well after all.

The sidhe hissed and flexed the formidable claws in its forepaws.

"Not so hasty, little girrl. Put down yer wee twig. We have much to talk about."

"I've got nary a word to toss at you." Saerwynn glared at the sidhe. "Off with you, I say, or I'll call my master. And he'll put an end to you."

"Hmmm? A cat's got yerr tongue?" Its eyes pulsed between yellow and amber, one color fading into the other.

Not the eyes, thought Merliss. Beware the eyes. This talking had gone on too long. She swiped the air with her claws and yowled, hoping to draw the attention of friend and foe.

The sidhe hissed and cut the wind with its claws.

Saerwynn shook her head like someone waking. She cocked her staff overhead in one hand and sent it flying like a spear.

"No!" cried Merliss. To cast one weapon while reaching for another was strategic. To throw your only weapon was foolish.
~~~

Add it on Goodreads
Posted by Jeff Chapman at 9:16 AM