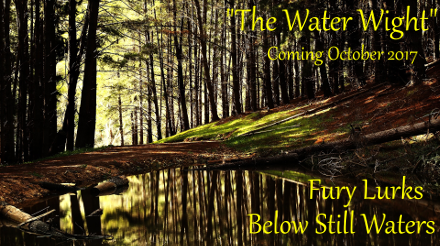 A dark gray cat, a shade shy of black, padded through a stand of hawthorn perched near the rim of a hollow. The cat moved with her tail low, the tip nearly touching the ground. To hold it above her back invited snagging her fur in the bush-like trees, whose branches bent low in permanent submission to the whistling moor wind. After slinking from under the trees, the cat stopped and pricked her ears toward the stream below.

A poorly sung tavern tune floated upward before the moor wind snatched it. A very, very old part of her wanted to join in the singing. She had so loved to sing when she was young. Sometimes, even after centuries of seasons, she forgot she was a cat.

She knifed between the thorny stems of a blackberry bramble, lithe as water slipping between rocks. Her paws whispered through the leaf clutter.

The hollow widened to a gentler slope. The cat crouched beneath an alder barren of leaves. The autumn foliage did not hang about long in the relentless wind. At the riverbank, a tall, thin young man baited his eel traps. To see but not be seen pleased her, as was a cat's nature.

"He'll leave no scraps for us, the greedy bastard."

The cat jerked her gaze skyward to find a raven perched on a stout branch. Three of the bird's tail feathers were longer and stuck out at odd angles like a boy with a cowlick. She did not like any animal, especially a bird to surprise her, but for this raven, she would curb her anger.

"Nor would you, Crowlluk." The cat licked a forepaw. "He may come from a nest full of hungry mouths."

"More like his own mouth is extra big," said the raven.

The cat folded her forepaws beneath her chest. "You are far from home."

"I know the tree. What is Mistress brewing with yew berries?"

"How should I know? I fetch what I'm told. And what brings a cat forth on such a cold morn, Merliss? Since we're inquiring into each other's business."

"It pleases me to prowl. Might find a fat grouse not paying attention." Merliss craned her neck to see the raven swivel his head to look away. Teasing Crowlluk was such fun.

Merliss sniffed and then sniffed again deeper. A wet smell was stealing up the slope, like froth pushed before a wave. The hairs along her spine stood stiff. "Crowlluk? Do you smell it?"

Merliss tasted the scent growing stronger. Her whiskers tingled with approaching vibrations. The supernatural possessed an unmistakable scent, as clear as a print in soft mud. She searched her memory for a matching scent.

"What is it?" repeated the raven, all the bluster gone from his voice.

"I don't know. It's coming from the river. And it's coming faster." Her claws flexed; her ears flattened; her tail stiffened to a fury wand. At times like this, the primitive cat sprang to the fore, ready to scratch and bite, and Merliss almost forgot she had once been a girl.

The man at the river's edge fiddled with his trap, positioning the bait, ignorant of any danger.

Warn him, cried a human voice in Merliss's subconscious. Tell the crow to sound an alarm, the voice counseled, but the raven was all raven and cared nothing for humans beyond his mistress.

The vibrations roared, approaching the crashing crescendo of a breaking wave. To Merliss, attuned to catch the twitch of the smallest enchanted cricket, the grass seemed to quiver, the bushes to shudder, and the trees to shake. Blades of pain ripped along the ley lines of her senses.

The water at the riverbank swelled into a mound. The eel fisher stood of a sudden, rocking back on his heels. At last he too recognized the danger, which shook Merliss from the points of her claws to the tip of her tail.

A human form erupted from the river with the force of a geyser. Arms clothed in froth wrapped the eel fisher before his wits recovered enough to raise his own arms. At the center of his back, the creature's limbs crossed and flowed together into a single watery rope. A blue-green wave molded itself to the fisher's chest and neck. He overbalanced, falling toward the river under the water creature's clinging weight. Merliss questioned why the man did not scream for help, and then she understood. A liquid head had fastened over the eel fisher's mouth. Fluid tendrils stuck out across the crown of the creature's head, and a white orb glowed through a slit where Merliss expected an eye. Her cattish aversion to water swelled her horror. A wave crashing against a rock spread more than enough of its dirty wetness, but a sentient wave that wrapped its wetness round its victim seeded nightmares.

The man splashed the surface, spraying water onto the bank and halfway across the stream. As swiftly as a rock sinks, his body disappeared. Waves rushed in to fill the void and collided where the eel fisher sank. Merliss inched backward, curiosity fighting with the instinct for flight. She had seen many creatures during her time, but never one so much akin to water itself.

Wings thrashed overhead. The raven left his branch, cawing a warning to all who could hear, near and far. Merliss's heart pounded at her throat. Crowlluk smelled it too, she thought. Death exuded a scent as peculiar as magic.

The current swept the eddies downstream. If not for the discarded eel traps and the lingering scents, which had settled over the stream, escaping the moor wind whistling over the hollow, Merliss might have doubted the attack had taken place. The old man must know of this, she thought, and quickly, before someone else dies.


Spirits in the Water is forthcoming October 2017.
Add it to your Goodreads' to-read list now.
Posted by Jeff Chapman at 3:00 AM

Email ThisBlogThis!Share to TwitterShare to FacebookShare to Pinterest
Labels: fantasy, Jeff Chapman, Spirits in the Water