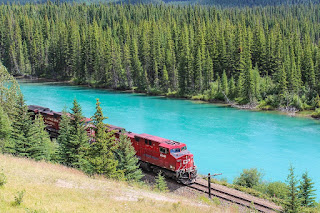 I'm so excited about our upcoming Spirits in the Water anthology! It will be released in October, but I wanted to share a snippet of my story with you today. It's called, You Can't Go Home Again.

How many of us have wished to go back and change something from our past? I imagine all of us. It's human nature to want a do-over. Be careful what you wish for, though...

an excerpt by River Fairchild

“Don’t look so glum, dear.” Clara leaned in closer, invading Alex’s space, and gave her a wink. “You have your whole future to look forward to. Wait till you’re my age for that sort of nonsense.”
She settled back into her own seat, soft gray curls bouncing with the gentle sway of the train as it negotiated a bend in the tracks. “Always look ahead, child. As my mother used to say, you can’t go back home again.”
“What?” The phrase struck Alex as odd, even sinister. “What does that mean?”
Clara put her knitting needles down in her lap and stared out at nothing with a dreamy smile on her face. “Mum had a saying for everything. It means you can’t go back and change the past. She used to say that nothing good ever came of worrying about what was already done and gone so you should only look forward and not repeat your mistakes.”
Changing the past…
Alex closed her eyes, ignoring the beauty of the countryside as her throat constricted. She’d give anything to undo the mistake she’d made five years ago—the mistake that allowed her younger sister to die. To stay with her that day at the lake—like she was supposed to—instead of getting into an argument and stalking off. If Alex had stayed, maybe she could have talked Liz out of sledding across the frozen lake on an overloaded sled.

Posted by River Fairchild at 3:00 AM