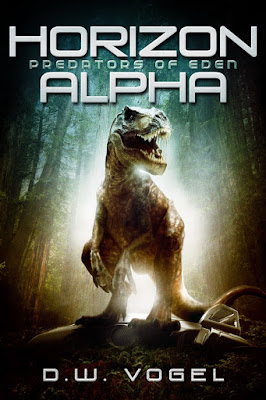 
I was recently in a group promotion where this was one of the books. I had to buy it because of the dinosaur on the cover.

Two hundred years ago, the great Ark Horizon Alpha escaped a doomed Earth and went searching for a new home. The passengers landed on Teu Ceti e expecting paradise, but instead they discovered a planet stuck in its own version of the cretaceous period. The humans’ one defense against the dinosaurs ravaging the planet is an electric fence, built from the remains of the shuttles that brought them there.

But Eden base has only days of power left.

With most of the adult men dead, rookie soldier Caleb Wilde and his unit of teenage boys leave the electric fences of Eden in search of a reactor core lost deep in the jungle.

The last remnant of the human race waits behind the electric fence for their return. The dinosaurs wait, too--for the electricity to die and the feast to begin.

Honestly, the prologue had me worried. It wasn't bad, just basically feeding me information about what happened before the story starts.

The story itself is fantastic. It's like Jurassic Park in space. It was suspenseful and fast-paced. It combined my love of dinosaurs, exploration, and discovery. The creatures go beyond dinosaurs as we know them, because, after all, they are aliens.

The author added in mystery along with the dino feast. I felt as if I experienced the planet alongside the main character: the fear, the wonder, the horror, the relief. It was a terrific ride.