The science & mystique of boxed sets 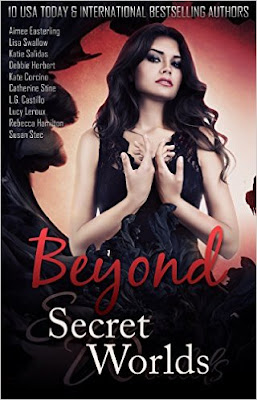 Here at UR we've done a boxed set of novels called Fantasy Rising, and two story anthologies, Twisted Earths and Mayhem in the Air. See them all here! They've been great to work on for various reasons. One is the socializing factor, getting to know each other better through the editing and decision-making processes of cover design, title choice and the like. But, they've also been beneficial to spreading word of our group, our individual authorship and bodies of work. And of course, they make money that helps us publish other sets and buy promo.

This year, I've delved into the world of boxed sets and story anthologies outside of UR as well. My first venture was in placing one of my indie novels in a huge boxed set called Secret Worlds with twenty other authors of fantasy and paranormal fiction. I learned a lot about marketing with this set. We assigned one author a day to be responsible for posting promo material on Facebook, Twitter, blogs, TSU and Instagram. We had a contingent of people who specialized in creating visual teasers, and another who took care of accounting and payouts. Still another took money and placed ads in popular book sites.

The hard work paid off. We landed on the Amazon Bestseller list for three solid weeks in three categories (myth, new adult & fairytale). This proved to be such a good system we've kept the boxed set up three months after we planned to delete it.

As a final marketing plan to boost the set through the holidays to New Years, we created a perma-free story anthology called Beyond Secret Worlds that relates directly to our novels in Secret Worlds, so people can follow us into our other books. see it on iTunes, Amazon, Kobo. 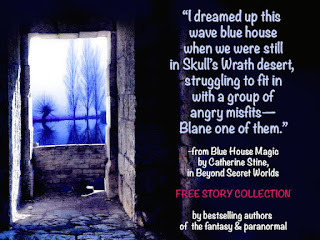 And, hey, it's FREE, folks! It includes my story, Blue House Magic, which follows Ruby and Blane from book two of the Fireseed series, to their new home in Vegas-by-the-Sea. So, it's a lead-in to book three (as of yet unwritten).

I've found readers love boxed sets because it allows them to sample a variety of work for a great price. If one story or novel doesn't suit them, they can simply read on to another one. Having a bunch of authors working on the same project is a huge relief. It's community-building and so much less stressful than always going it alone. But it does require good organization, and sometimes, even a strict leader, barking away at the crew.

Have you participated in a boxed set or story anthology? Did you enjoy it? If so why? Pros and cons?
Posted by Catherine Stine at 9:06 PM