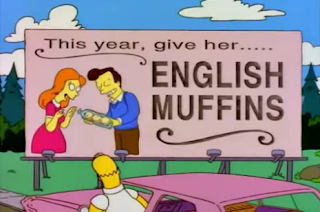 We've all gotten at least one ridiculous gift in our lives. You know, the one from the loony aunt who sews dresses for her cats or the immature thirty-year-old brother who thinks he's hilarious. And he's the only one who thinks that. It's the present that made you furrow your brows, shake your head, and laugh out loud. Or maybe, yeah, you're the one who bestowed such a bizarre bounty upon someone. We're going to share with you our goofy gifts. Please tell us about yours!

When I was 14, I got a plastic hanger. I did my best to smile and be enthusiastic about the gift, but it was hard. My sister and cousin received the same in different colors. We may have been surprised by our odd gifts and laughed about them a lot, but, ya know, we've never forgotten them or the aunt who gave them to us. It did help me organize my scarf thingies-can't remember what they were called, they ended in a knot-purses, and belts. So, thanks Aunt Nancy for a yuletide memory that never fades. This is sort of what it looked like, but in red. 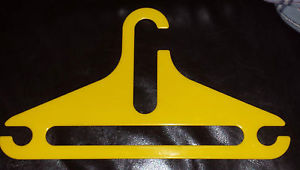 I had one Grandma (my father's mom) that gave my brother and I bath towels every year for Christmas, and for three years in a row, my mother-in-law gave me scrub pads to wash the dishes. I'm going to tell you a story with a happy ending, though. Every year growing up, my great Auntie Jo would give my brother, cousins, and I knitted Christmas sweaters she made herself. Nowadays, people love to get ugly sweaters, but when you're a kid, they are the worst sort of gift. They itched like crazy and were the worst colors. I remember one year getting a sweater with a misshapen reindeer in maroon. When I was fourteen or fifteen, we stopped receiving gifts from Auntie Jo, and I didn't receive another until my son was born. My son was the first grandchild on my mom's side (my Nana's first who is Auntie Jo's sister). Auntie Jo doesn't have any grandchildren of her own. She handmade a beautiful baby blanket. It's stunning. It made my mom cry. All those years of practicing made Auntie Jo a master. I thank her for all those years of ugly sweaters. I wish I appreciated them more back then, but her baby gift was most treasured and her generosity and talent forever remembered. 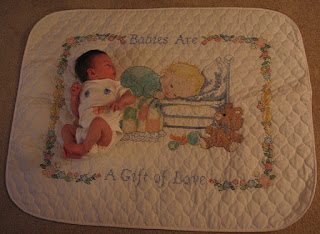 I was five at the time, and each student in our kindergarten class brought a wrapped gift to exchange. We all had numbers, and I watched other kids open up toys, books, coloring books, and the like. We each had to open our gift in front of each other and say what we got. My anticipation and excitement grew until it was my turn to open my gift. And what did I find? Socks. Adult-sized, pink wool knitted socks with a purple button upon them. Where was the toy? The book? The crayons? I threw the socks onto the desk and mumbled what I received. Socks can be a fine gift, don't get me wrong, but most five-year-olds would prefer anything else. And I, unfortunately, don't have a picture of said socks. I believe they might have slipped into a Goodwill donation bag over the years as they were itchy and uncomfortable.

Ever since we decided on this topic for a group post I have been racking my brain trying to think of a suitable entry. Try as I might, I simply can't remember a gift I've ever received that qualifies. So I did some googling for weird gifts and immediately found a favorite that I thought I would share instead. An ugly Christmas sweater made just for guinea pigs. Who could resist it? I want to give a fair warning to everyone I know. If you ever get a guinea pig you are going to find this sweater under your tree.

One year I received the book, The Courtship of Miles Standish. That wouldn't be too catastrophic if I had been an adult, although it would probably sit on my shelf unread for all time. The real issue? I was only nine years old. 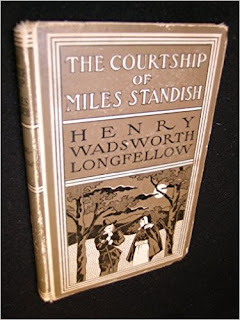 I don't remember receiving any strange gifts when I was a child. We always received clothes and then one toy. But as an adult, my new husband gave me something really strange. We used to love to go out dancing, and we were pretty good, too. At least, I thought we were. I thought I was holding up my end as a dancing partner...until he gave me two left shoes for Christmas.

MERRY CHRISTMAS FROM ALL OF US AT UNTETHERED REALMS!
Posted by Christine Rains at 12:00 AM