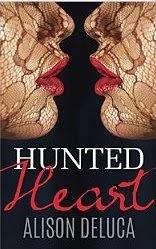 I rarely review novels. That’s because I don’t like to read books I’m lukewarm about and I detest giving negative reviews.

Happily, Hunted Heart by Alison DeLuca is a novel I can truly gush about. It’s a very adult twist on the classic Snow White. Having just written a twist on A Picture of Dorian Gray with my YA horror, Dorianna, I know how tricky it can be. The writer needs to echo the original tale enough to craft a genuine homage, yet in their new version, they should let it free-float organically out of the predecessor’s ghost to form an innovative story uniquely suited to the era and zeitgeist. DeLuca pulled it off!

Tali is a poor yet beautiful and brave huntress who knows the forest in and out, and whose only family is an old man who rescued her from abuse many years prior.  She is called to the palace to meet the new Queen Leila, who has taken the much beloved Queen Freja’s place after her unexpected early death. Supposedly, Queen Leila wants to meet this impressive huntress because Tali is rumored to have killed a monstrous Drauger, an undead in animal form.

Fancy digs and stuffy parties make Tali uneasy. When she sneaks away to the library to escape the snooty crowd, she runs into Prince Kas, a handsome man who loves books. This is one of the first cool twists—he’s a prince who’s a real bibliophile.

The rub: Queen Freja has lured Kas into her bed and drugged him, but Kas is not so receptive. In fact, once he snaps out of his drugged state to discover what’s happened he is revolted. He is much more admiring of Tali, who can tell alluring stories as well as go on dangerous hunts. Meanwhile, Queen Freja has developed an obsessive crush on Kas, and when she realizes Tali and Kas have warmed up up to one another she orders Tali to complete a horrifying task: hunt Kas down, cut out his heart and bring it back to her as a trophy. 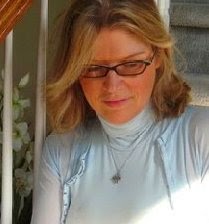 I won’t reveal any spoilers. I will only say that this novel kept me turning the pages, and reading way, way into the night. DeLuca is an incredible wordsmith! Her prose is spectacularly beautiful. The action was breathtaking and the surprises just kept on coming. Oh, and the romance was sizzling. Highly recommended to anyone who likes fresh twists on classics, dark fantasy, unusual romances, or just a flipping great novel!

Shop for the Hunted Heart, on sale at Amazon for 99 Cents!

See all of Alison DeLuca's books, including her popular Crown Phoenix series here.

Alison DeLuca is a writer of urban fantasy for young adults. She was born in Arizona and has also lived in Pennsylvania, Illinois, Mexico, Ireland, and Spain. As a teacher she taught every grade level in every kind of school district possible. She currently lives in New Jersey with her husband and daughter.

What twists on classics have you found compelling? Ever tried to write one?
Posted by Catherine Stine at 4:30 AM