Graeme's new dark fantasy was released back in August. It's available on all ebook formats and paperback. 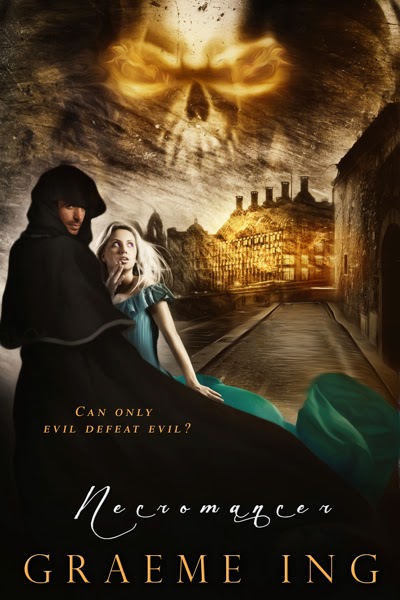 "A primeval fiend is loose in the ancient metropolis of Malkandrah, intent on burning it to a wasteland. The city's leaders stand idly by and the sorcerers that once protected the people are long gone.

Maldren, a young necromancer, is the only person brave enough to stand against the creature. Instead of help from the Masters of his Guild, he is given a new apprentice. Why now, and why a girl? As they unravel the clues to defeating the fiend, they discover a secret society holding the future of the city in its grip. After betrayals and attempts on his life, Maldren has reason to suspect everyone he thought a friend, even the girl.

His last hope lies in an alliance with a depraved and murderous ghost, but how can he trust it? Its sinister past is intertwined in the lives of everyone he holds dear.

Can only evil defeat evil?"

At the door, she dragged her heels. “I’ll wait out here until you’re done.”
I tugged her forward.
“It’s too dangerous and I don’t want you out of my sight. You’re my apprentice, so you have to obey.” I winked.
She rolled her eyes but followed me into the dark taproom. I separated our hands as we crossed the threshold. Necromancers don’t hold hands.
The dregs of society were already congregating, weaving drunkenly among stable boys scattering fresh straw. True to the inn’s name, the stench of old vomit mixed with that of stale beer. Arms reached out to paw at Ayla, but when they saw my robe they slunk away into dark corners. I stood tall. Yes, you lecherous mob, the necromancer just stepped into your sleazy world.
There was no sign of the Duke’s men, or anyone else trying to catch my attention. The back stairs creaked and bowed as we ascended, and I didn’t risk putting weight on the unsteady banister. The upstairs hallway was empty, so we strode past several doors that muffled ecstatic cries or snores, and I knocked on the rearmost door.
No answer. Kristach, he’d left.
I pushed it open and froze.
I tried to block Ayla’s view but she slipped past me into the room. She gasped and her hands flew to her mouth. Then she doubled over in a crouch and threw up, spraying her breakfast all over her feet. I hurried inside and shut the door. Thank Belaya she hadn’t screamed, but she uttered a low, haunting moan, at the same time clutching her abdomen and trembling.