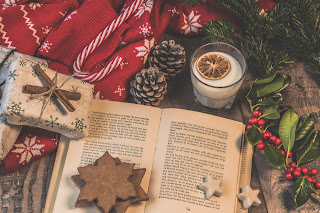 “It came without ribbons. It came without tags. It came without packages, boxes or bags. And he puzzled and puzzled ’till his puzzler was sore. Then the Grinch thought of something he hadn’t before. What if Christmas, he thought, doesn’t come from a store. What if Christmas, perhaps, means a little bit more.” How The Grinch Stole Christmas by Dr. Seuss
Happy holidays from the authors of Untethered Realms!
What is your favorite holiday read?
Christine Rains - Hogfather by Terry Pratchett. The Hogfather, Discworld's equivalent of Father Christmas, is missing and Death takes his place. As Death goes about his job, his granddaughter Susan tries to find the Hogfather and must deal with an assassin looking for him too. Hilarious, surprising, and wonderfully fun. It's a different sort of holiday read, but right up my alley.
Gwen Gardner - A Christmas Carol by Charles Dickens is always my go-to Christmas read. Ebenezer "Scrooge" became synonymous with someone who hates Christmas. But through the visit of three ghosts over the course of a single night, Scrooge learns the real meaning of Christmas.
Here's my favorite quote:

“And how did little Tim behave?” asked Mrs Cratchit, when she had rallied Bob on his credulity and Bob had hugged his daughter to his heart’s content.

“As good as gold,” said Bob, “and better. Somehow he gets thoughtful, sitting by himself so much, and thinks the strangest things you ever heard. He told me, coming home, that he hoped the people saw him in the church, because he was a cripple, and it might be pleasant to them to remember upon Christmas Day, who made lame beggars walk, and blind men see.”