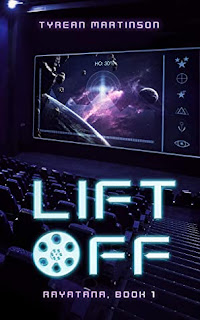 Blurb: A spaceship in disguise,An Earth girl searching for a sense of home,And a Thousand Years' War between alien races,All collide on a summer afternoon.An old movie theater welcomes Amaya in and wraps her up in the smell of popcorn and licorice. But one sunny afternoon during a matinee, the movie screen goes dark. The theater rumbles.Amaya gets trapped in the middle of an ancient alien conflict. Angry and frightened, Amaya entangles herself in a life-changing cultural misunderstanding with Sol, a young alien who keeps omitting key information, even while they're on the run from his enemies.What will it take to survive a battle between alien races involved in an ancient war?
Christine's review: Amaya is settled into an old movie theater with friends when suddenly the whole place shakes as if an earthquake. While her friends make it out, Amaya is held back from jumping by Sol (seemingly a guy who works there) as the theater now spaceship propels up into space. Now she's in the middle of a centuries old war and bonded to a cute alien who she doesn't know if she can trust or not. There are so many things she doesn't understand, but she has to learn what she needs soon or she may not survive her next trip through space.
A fantastic start to this YA sci-fi series. I immediately felt sympathy for Amaya, dealing with normal Earth teen problems like her parents being divorced and trying to fit in at a new place. Then the new place becomes a whole new world as the story immediately blasts off with the spaceship. I loved that the ship was disguised as a movie theater and the descriptions of what the high tech the everyday Earthling things hid. We're introduced to a lot of history and aliens in this novella, but it didn't bore me and the tension kept taut throughout. It's a solid ground to set the series on, and I can't wait to dive in to the next book. 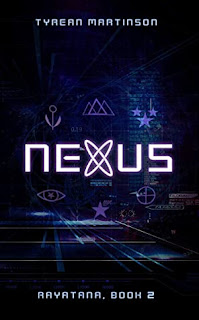 Blurb: Amaya is supposed to bring peace to the galaxy. Which is tough when she’s being held for crimes against the Neutral Zone. Her imprisonment is on her own ship with her own crew. But close quarters create tension.
Honestly, her role as Rayatana is a mess.She may never get to use her powers for anything good. Not if her teacher continues to keep secrets, and not if her powers keep harming others. Putting her mother in a coma should put her in prison, but she has a mission. She wants to bring peace to her people. She needs to become the Rayatana.
Christine's review: Amaya is the child of three worlds, the Rayatana, and she is prophesized to bring peace to the galaxy. She struggles with what to do as she didn't grew up with the knowledge of the vast peoples and the galactic politics. What she must get through first is the Trial of Integrity. In a simulation, not all is as it seems. Amaya wants only to help everyone and bring every-lasting peace, but to do so, she must learn how to control her own power before it destroys everything and everyone she loves.
This is the second book in the YA sci-fi series, The Rayatana. This one is even better than the first! The reader already has the base of the galaxy and the various people. There are many layers in the history and current politics, and even different forces within each species. Amaya tries her best to maneuver through all of it and admirably stays true to her heart and morals. I especially liked Cheleth, the living planet of a species similar to what we would call dryads. It is at once high tech and beautifully natural. As each piece of the action-filled plot unfolds, more surprises are revealed. I cannot wait for the next installment of this fabulous series.
You can find Tyrean Martinson on her site here!
Posted by Christine Rains at 9:30 PM