What People 100 Years Ago Thought Life Would Be Like Now 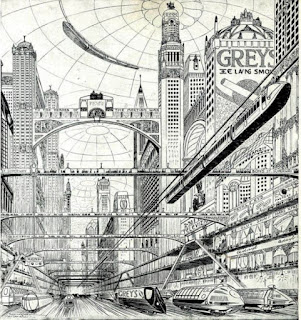 We may think we're living in a world no one could have ever imagined, but there are some creative minds who believed they could see what the future might bring. Life one hundred years ago might seem like medieval to us now. Yet there were folks with eyes to a technological tomorrow.

One of the big themes people in the last century imagined were domed cities. We don't have those. Yet. It's something scientists and science fiction authors still see in our future based on pollution and climate change. We could at least control the climate inside the domes.

Everything flying. Whoosh! People thought cars, jetpacks, houses, even cities, would be flying by now and part of everyday life. While that still could be a possibility, it isn't as practical as it might have seemed. Now a vast system of ultra fast monorails to travel the world...

Robot helpers. While we aren't overrun by robots yet, more and more things are becoming automated. We're rushing faster toward that world. Finger crossed it isn't a Skynet future!

People thought we'd be able to control the weather. I think Earth is winning on that front. We need to use our technology to learn to adapt rather than control it. Though, wait... Wasn't there the rumor that someone did have a weather machine?!

We should have the moon as our playground, right? Folks a century ago thought we'd be taking regular recreational trips to our moon by now. While I don't see the moon as a playground, it would be a vied-for source for companies to mine materials. Though, then we'd have to imagine our world without a moon and the trouble its loss would cause. Mars seems to be our fascination for our next home these days.

What do you think life will be like one hundred years from now?

Posted by Christine Rains at 12:28 PM