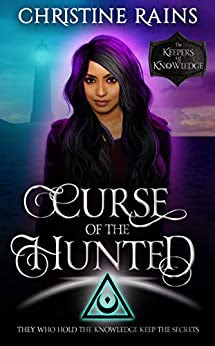 Meet Akila Levesque, Sphynx...Akila's well-ordered world has fallen apart. Her delinquent brother, Cairo is the only family she has left after their mother's death. When she receives the letter from the High Council of the Supernatural to become a Keeper, she believes this could be a fresh start for both of them.But the moment Akila presents a family heirloom to give to the Keepers as her part of her initiation, everything erupts into chaos as the cracked Egyptian statuette runs away. Corrupted by its broken aura, the rogue artifact hunts Akila in the ghost riddled seaside town.It's doesn't help when the gorgeous Chaz Nowiki keeps turning up wherever Akila goes. She doesn't want a gargoyle in shining armor to save her, even when he looks so hot his firefighter's suspenders. Yet even with the help of a powerful guardian, things grow desperate when the relic targets Cairo as well.Now Akila must risk everything to save her brother. But will that even be enough when she has no idea what it means to be a Keeper or a Sphynx?"After all, every secret needs a Keeper."

A pleasurable, unique story! Gargoyles. Sphynx. Witches. Merfolk. Vampires, Fae, and more, are all part of the Council of Supernaturals.The Curse of the Hunted is about Akila, a Sphynx and her brother Cairo. With their mother deceased, Akila moves them into a Supernatural Village to train as a Keeper. Akila has the ability to see ghosts, but keeps this information to herself until....I never leave spoilers...LOL....She brings with her an ancient relic, and then all hell breaks loose.There is fast-paced action with each turn of the page as Akila and Cairo battle the elements the relic, ushabti throws at them. I never thought of gargoyles as good-looking until Chaz! Chaz has given me a newfound love for hot gargoyles. Somewhat behind closed doors, but with plenty of teasing innuendoes, the reader enjoys romance within the pages of Curse of the Hunted.

I highly recommend, Curse of the Hunted!

Posted by Cathrina Constantine at 9:00 PM