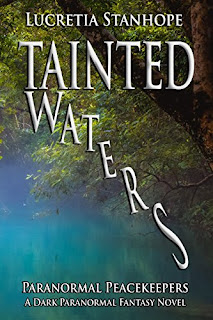 Tainted Waters takes place in a world where witches, light elves, and dark elves are in perpetual conflict. A cold war between the group simmers and it won't take much to spark a hot war. Despite the inherent animosity, strange allegiances form between witches and elves. But can anyone really trust anyone else? Trusting your natural enemy for benefit and survival is the theme at the heart of Stanhope's novel.

A coven of witches and a clan of dark elves share a forest, both want access to its resources. Their forays into the woods bring them in deadly contact and conflict with one another. Alice--half light elf and half witch--is a new member of the coven. As many of the characters point out, Alice shouldn't exist. A union between a light elf and witch shouldn't happen, but she does exist and her mixed blood gives her unique abilities which makes her dangerous to everyone. Alice is young and still in training, hardly aware of her strengths.

Someone in the coven sends her to a cave to search for nettles. The cave is the home of the dark elves that share the forest. Alice is captured and questioned. She would have been killed straight away and cut up for her bloody bits but the dark elves are intrigued by her lineage. They also have a problem. They believe a witch has poisoned their water supply and the leader of the clan decides to use Alice to remove the hex. Alice realizes she was sent to the cave to die. Someone in her coven wants to be rid of her and maybe start a war. Alice decides to help the dark elves with their water. She doesn't have a lot of choices. Complications abound as Alice discovers her worst enemies might be her best friends.

If you enjoy stories about magic and twisted allegiances where it's not clear anyone can be trusted, you'll love Tainted Waters.