Shifters, Revenge & the Shadow Self

I’m writing a paranormal romance in a shared world shifter series, The Royal Alpha Wolves Club. My book is called Alpha’s Revenge, starring Wayland Leblanc. He craves revenge after his whole royal line is slaughtered by the Tundra, a rival royal pack. The worst thing? They killed Wayland’s fated mate, Sabine and their unborn heir.

It’s ironic that I’m tackling a shifter hero, after I steadfastly avoided reading Stephanie Mayer’s Twilight series (or watching the films), which fueled the newest mania for shifters (Though, let's face it, Dr. Jekyll and Mr. Hyde were shifters). I thought Twilight was for teens and so I couldn’t quite square it with my reality, though I've realized, I was making assumptions. In fact, I have written about shifters… I’ve created water sprites, ghosts, witches and Dorianna, who forged a deal with the Prince of Darkness, and shifted into a beastly version of herself that became almost unrecognizable.

Another irony is that in the last year, I’ve pinned up lots of wolf, fox and coyote images on my bedroom wall. Why? I identify with their feral drive, their loyalty to family and love for their forest homes. Also, their sharp instincts. Here’s one of the images I love most. It’s a mama coyote and her pups (Photo credit: Jim Zuckerman for the Sierra Club). 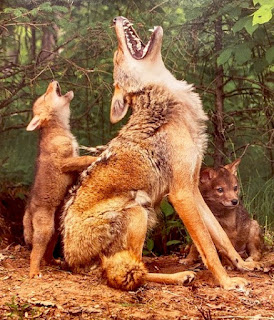 In fact, in Alpha’s Revenge when Wayland returns solo to his native Canada to eke out his form of payback, he befriends and enlists a pack of scruffy, wily coyote shifters. I wrote those scenes before I took this card down from my wall and saw that these guys were not wolves but coyotes! Excellent coincidence.

Anyway, I’m reminded of Carl Gustav Jung’s writings on the Shadow Self:

"Everyone carries a shadow," Jung wrote, "and the less it is embodied in the individual's conscious life, the blacker and denser it is." It may be (in part) one's link to more primitive animal instincts, which are superseded during early childhood by the conscious mind.”

This quote is good too…

“How can I be substantial if I do not cast a shadow? I must have a dark side also if I am to be whole.” … “In each of us there is another whom we do not know.” – Jung

Finally, here’s the cover of Alpha’s Revenge. It launches on September 3rd and I’m really enjoying writing it! 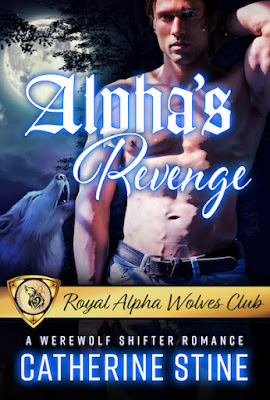 What do you think is essential in a (wolf) shifter character? What would you like to see in one that you don’t usually see? What’s your favorite shifter type?

Posted by Catherine Stine at 7:45 AM