A Review of Familiarity: A Winston and Ruby Collection by Kristine Kathryn Rusch #fantasy #cats #familiars 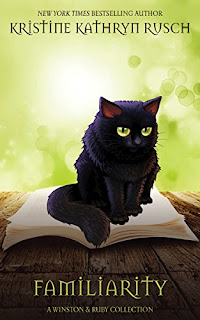 Winston: A kind and quiet wizard possessed of small magic.
Ruby: A familiar with a big mouth and even bigger heart.

My Review: Winston lives in a small town on the Oregon coast along Highway 101. He runs a small curiosity shop catering to the tourists. The locals know him as "that crazy guy with the cat." The locals do not visit his shop, which makes little money. His real line is a mail order business. He ships potions on a weekly basis all over the United States, Canada, and Europe. He's not rich but it is a living. He has a small magic. And the shop gives him somewhere to go every day, a reason to leave his cottage.

Winston's magic would be nothing without his familiar. He works best with cats and they choose him. (If you live with cats, this won't surprise you.) His familiars also have a lot of attitude and have no problem expressing their opinions and desires in perfect English.

Winston wants to live a quiet life somewhere below the radar and tinker with his potions in the workshop in the back of his store. He used to live in San Francisco but an unpleasant misunderstanding required him to leave quickly. He wants nothing more than to avoid trouble but trouble wanders into his shop on a regular basis.

Familiarity collects five Winston and Ruby stories. “Familiar Territory” tells the tale of how Ruby came to live with Winston and the death of Buster, Winston's former familiar. Buster leaves some odd instructions for his funeral and his spirit sails off in a blaze of glory, literally. In “Saving Face” Winston and Ruby work with a local detective to track down a killer when a woman who visits Winston's shop turns up dead. In “Searching for the Familiar” Winston hears rumors that familiars are going missing and when the rumors become a reality for Ruby, Winston is frantic to find her. “Disaster Relief” tells the story of Ruby's attempt at altruism. She convinces Winston to open their cottage to the magic users and familiars displaced by Hurricane Katrina. In “Un-Familiar” Ruby teams up with a toy poodle-Chihuahua mix. Ruby usually has nothing to do with dogs and she won't tell Winston what's up with the poodle-Chihuahua.

If you love fantasy and you love cats, Familiarity was written for you. The characters are truly charming. My only disappointment is that the collection comes to an end and as far as I know, there aren't any more Winston and Ruby stories.
Posted by Jeff Chapman at 8:39 AM