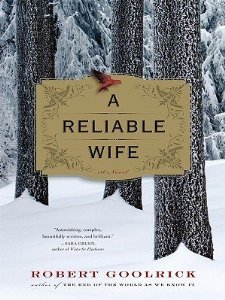 Robert Goolrick is an intricate and captivating writer. When I began to read A Reliable Wife I was hooked after the first page. Mr. Goolrick's writing is superb and I hung on his every word.
As you absorb A Reliable Wife, Mr. Goolrick slowly peels away the nuance's of the main characters bit by enthralling bit. A Reliable Wife is an emotional and oftentimes darkly obsessive story of deception.
Towards the conclusion of A Reliable Wife, Robert Goolrick's writing becomes breathtakingly wordy and at the close you breathe a sigh of relief and shake your head at the complexities of this novel.
Posted by Cathrina Constantine at 12:00 AM