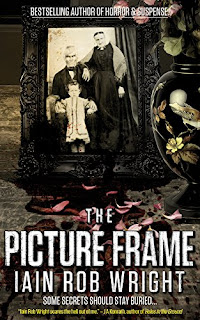 The past can be deadly.

Blake Price is the most celebrated mystery writer since Agatha Christie, but a violent tragedy has sent him and his family to a secluded cottage in the English countryside.

Trying to connect with his spirited ten-year old son and despondent wife is difficult, but Blake tries to hold the strands of his life together as best he can—but that becomes impossible when an old picture frame finds its way into his life. A picture frame that curses anybody unlucky enough to have their picture placed inside of it. Unfortunately, Blake’s wife thinks the frame is just perfect for a family photo...

Some memories should stay buried.

One of the most disturbing covers I've seen in a long while. I don't want to look at it. The family portrait seriously creeps me out, but I feel drawn to look at it and delve into the text beneath. Yes, blood is dripping from the frame.

Blake Price's attempt at a bucolic life is shattered when he and his son dig up an old picture frame in the field beside their cottage. Blake is spending quality time with his son, messing about with a metal detector. The frame is wrapped in a burlap bag. Blake doesn't show his son the small bones rattling at the bottom of the bag. Chicken bones he thinks. Very odd.

Blake's son puts a photo of the family dog in the frame. A van on the highway puts an end to the dog. Blake's wife puts a family photo in the frame—the three of them and her mother. Grandma drops dead of a heart attack.

It appears whatever evil haunts the frame will not be satisfied until everyone inside is dead, but to what purpose? And the blasted thing is indestructible, impervious to hammer and car tires. Wright slowly tightens the screws on the family as Blake struggles to figure out the frame's curse. Although he cannot get the family portrait out, Blake's younger brother discovers he can replace part of the image with someone else's picture with deadly results. Wright puts Blake in a serious moral quandary. Should he murder others to save himself and his family? According to what Blake has learned, the only way to stop a curse is to make it work against itself.

The Picture Frame is a fast-paced read with some unexpected twists. I found a few more copy-editing errors than I like to see and Wright's treatment of a retired priest character is one-sided and shallow. Those qualms aside, The Picture Frame is an enjoyable horror experience. A welcome companion for a chilly autumn evening.
Posted by Jeff Chapman at 5:00 AM