“The Flaming Emerald” by Jeff Chapman. When Orville finds an emerald in a pawnshop, Jimmy suspects there’s trouble ahead, which is precisely what they encounter, trouble of a very weird and supernatural kind. Will they rid themselves of the cursed jewel before the flames scorch them? Don your hat, saddle your horse and ride into another weird western in Chapman’s Huckster Tales series. 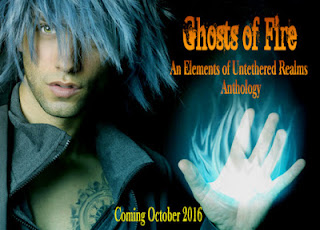 “I don’t know, Orville. Maybe we oughta just drop it back in that bin where you found it and skedaddle.” “And you oughta watch the master and learn, apprentice.”

I frowned at Orville’s broad back wrapped in his yellow tweed jacket and followed him inside. He always claimed we were staying on the right side of the law. I knew Orville would never stoop to simple thievery, but sometimes stealing and cheating seemed damn near the same thing as outsmarting, even if it was legal. Sometimes I longed for the simple days of the ranch hand life, grub and coin for a day’s labor, honest work that got your hands dirty but didn’t leave your soul feeling slimy.

We found the old woman behind the counter, playing with the beads on her bracelet.

“Who’s there?” She stared in our direction through those spectacles, her eyes magnified to the size of teacups. Her lower lip bulged with snuff, and I wondered with eyes so foggy how she ever hit her spittoon.

“Humble bearers of a fine jewel to augment your collection, ma’am.” Orville leaned forward with the hint of a bow as he doffed his black derby.

The old woman tittered with a glimmer of girlish delight peeking through her hardened countenance. Was Orville trying to flatter her or look stupid? Either way, I think the old woman let her guard fall just a bit.

“We’ve fallen on hard times, you see, and must part with something most dear to right our leaky boat. This belonged to my great aunt, God rest her soul. I loathe to part with it, but she left it to me for just such a fit of troubles.”

What my grandma would call a witch’s grin—cruel, mocking, and hungry—curled across the old woman’s wizened face. “Well you’ve come to the right place for help, you have,” she muttered. “Honest Abigail will do you right every time.”

“A paragon of integrity I’ve no doubt,” said Orville.

“A mere trinket,” Orville assured her, “but perhaps your generous heart will take pity upon us?” Laying it on awfully thick, Orville was. Did that woman even know I was there? Her gaze hadn’t flicked once in my direction.

Orville pulled the emerald out of his jacket pocket and laid it in Honest Abigail’s outstretched hands. A grin warmed her features as she fingered it, and then she brought it up level with her nose, within range of her spectacles I suspect.

The scream she let loose sent Orville and me flailing backwards. I’d seen twisters blow with less violence. Who’d have thought her old lungs had it in them? The emerald bounced once on the counter and then lay still.

“Where? Where’d you get that? You… you thievin’ buzzard!”

“Now you listen here, you dried-up crone,” yelled Orville, dropping all pretense of simpering civility. “I ain’t no thief. I bought that there jewel from you fair just the other day.”

Whatever color hid in the valleys of those wrinkles drained away. “I sold it to you?” She flicked her fingers at it, pushing it back to Orville. “No, no. ’Tain’t true. Can’t be true. You thieved it. Tryin’ to trick me you are, you lyin’ scallywag. I’m callin’ the sheriff. Thief! Thief!”

I stepped to the door, ready to make a retreat, but the one thing Orville couldn’t tolerate was being called a thief. His face flushed red and his bluster rose like a locomotive building a head of steam fit to burst. I don’t think any of us saw exactly what happened just before all flaming hell broke loose. Was there a warning? A spark? A wisp of smoke? A red glow before the tinder caught?

We missed the warning, but we didn’t ignore the storm.

A tower of flames shot skyward from the emerald, green just like in the hotel room, and licked the ceiling. Branches of flame roared from the trunk. Looked more like a spruce tree aflame than any normal fire. A crackling roar deafened me, and a wind hotter than a desert at high sun blasted my face. I recalled the cruelty of that fiery face from the night before, but this inferno was different, hotter and hungry. It wasn’t no messenger. Red flames spread where the ceiling had caught fire. The whole counter danced with red and orange, and at the center was the green tower spouting from the emerald, lashing out to set every corner of the shop afire. Black smoke churned overhead like an angry spring tornado. Only a fool could miss it. Martha Grimsey’s ghost intended to burn the place down, along with anyone in it.

Intrigued? You can get “The Wand,” another short story in the Huckster Tales series for free at www.jeffchapmanbooks.com.
Posted by Jeff Chapman at 4:00 AM