The Haunting of Maddy Clare #BookReview / Speculative Fiction Worth Reading 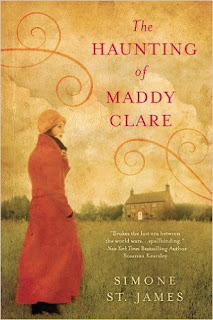 Sarah Piper's lonely, threadbare existence changes when her temporary agency sends her to assist a ghost hunter. Alistair Gellis-rich, handsome, scarred by World War I, and obsessed with ghosts- has been summoned to investigate the spirit of nineteen-year-old maid Maddy Clare, who is haunting the barn where she committed suicide. Since Maddy hated men in life, it is Sarah's task to confront her in death. Soon Sarah is caught up in a deperate struggle. For Maddy's ghost is real, she's angry, and she has powers that defy all reason. Can Sarah and Alistair's assistant, the rough, unsettling Matthew Ryder, discover who Maddy was, where she came from, and what is driving her desire for vengeance—before she destroys them all?

The Haunting of Maddy Clare by Simone St. James is a fascinating ghost story combined with a compelling mystery. The ghost of Maddy doesn't simply go bump in the night. She throws things, destroys, and most frightening of all, possesses the minds of the living.

Maddy arrived at the Clare house seven years earlier. She was bruised, covered in mud, and wearing nothing but her underclothes. She was also unable to speak. All attempts to discover where she came from were met with silence. No one from neighboring houses or villages reported a missing twelve-year-old girl. The Clares gave the troubled girl work as a maid and she lived with them until her suicide. Maddy's ghost communicates with Sarah and demands that Sarah find her grave. This makes no sense to the ghost-hunters because Maddy is buried in a marked grave in the church cemetery. As the mystery of Maddy's past unravels, a shocking and horrific crime comes to light and a ghost seeks revenge.

Set in rural England in the early 1920s, the ghosts of World War I haunt the characters almost as much as Maddy's ghost. St. James tells the story from Sarah's perspective and the novel feels similar to the Bess Crawford mysteries. Sarah and Matthew develop a romantic relationship, which becomes graphic at times, but the romance does not get in the way of the very compelling ghost story. The novel's pacing is good although I think the characters are a bit slow to figure out Maddy's story once they uncover the major clues. If you like ghost stories and you like historical fiction set in the World War I era, you should give The Haunting of Maddy Clare a read.