An A to Z of Funny Things About the Paranormal 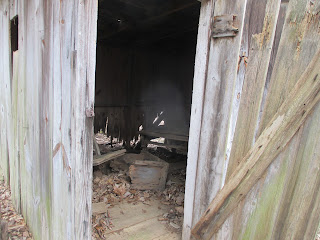 (Is that a ghost in the old shack or a smudge on the lens?)

April is a busy month in the blogging community with the A to Z Challenge. I love participating in the challenge, but too many real life events are happening in the next few weeks that will steal my time online away. I'll be cheering the participants on, though.

In celebration of the challenge, here's my A to Z list of funny things about the paranormal. I hope you enjoy and maybe find something new to fascinate you!

A - Amazons. Legendary warrior women. One myth says they died out because they interbred with centaurs. Maybe that's why they didn't want human men!

B - Bogeyman. He lurks in children's closets and kidnaps them at night. It could be that's because he's a demented genie and is acting on disgruntled parents' wishes.

C - Chupacabra. Weird government experiment or coyotes with mange? I don't know, but the chupacabra reports in Russia say it likes to arrange its victims aesthetically.

D - Djinn. These aren't the genies which are Jinn. The Djinn hate all living creatures and the gods. They want to combine into one powerful Djinn and cleanse the universe of everything else. What they need is a bunch of robots to form one giant robot!

E - Elves. One of the most popular supernatural beings. But are they friendly or evil? While you're trying to figure that out, watch out for the invisible ones who cause the disease "elfshot." It was once a real medical condition when invisible elves shot people with invisible arrows.

F - Father Time. A bearded old man who hands over the hourglass to a baby when the calendar changes to a new year. Some believe Father Time and the New Year Baby are one and the same, constant cycle of beginnings and endings. Both in diapers.

G - Ghosts. Are they imprints left in this world from humans or beings from another dimension? Being haunted has long been a fear of humans, and there are accounts going back 2,000 years of young men playing practical jokes by faking hauntings.

H - Hellhounds. These fearsome canines guard the world of the dead. There are several tales about headless hellhounds which I think would freak me out more than the ones with sharp teeth!

I - Imps. Be it a tiny goblin or a lesser demon, these little critters like to pull pranks. All they want is human attention, but their wild nature prevents them from being good companions. Maybe if they stayed off the wings of airplanes, I'd be less afraid of them.

J - Jackalope. It's not unusual to see myths about animal hybrids. But this one might not be totally fake. The Aztecs worshiped a creature like it, and it's no surprise it had to do with fertility.

K - Krampus. Originally the Krampus combated white witches at the winter solstice, but then he became the Anti-Santa. He kidnaps naughty children and sucks the evil from them. Maybe he's related to the chupacabra?

L - Leprechaun. If you capture one of these fairies, they will grant you three wishes. But not all of those wishes are possible. They can only imbue you with good luck to obtain whatever you want, so you still must do the work. Of course, that could mean simply buying a lottery ticket!

M - Mummies. Not zombies. They are born of a curse and have the intelligence they had in life. Also, mummies can gain beauty and immortality by eating human flesh. So not zombies because they are much worse!

N - Naiads. Beautiful water nymphs. Children coming of age were washed in their waters, but watch out if you're a handsome man. These nymphs are jealous and greedy! And don't realize humans can't breathe water.

O - Ogre. A giant monster that eats children. But not their feet. They do have some taste, after all!

P - Pegasus. This divine winged stallion has quite the heroic mythology. He also has a very intimate relationship with the Muses.

Q - Quetzalcoatl. Say that five times fast! He is the feathered serpent Mesoamerican god of wind and learning. Some legends say he was the only god who was against human sacrifice. Could be why there are several stories about other deities trying to kill him!

R - Roc. This legendary bird has origins in myths around the world. In one, it shakes the Tree of Useful Things causing the fruit to fall, and that's why humans have useful things. If that tree existed today, you can imagine what "fruit" might grow on it and that is why the Roc only shook it once.

S - The Stool. And yes, I mean poop! Several different droppings will come together to form one big sentient blob. Don't breathe in. The noxious fumes could kill you.

T - Trolls. These creatures live isolated in mountains and caves. Many people in northern Europe still believe in trolls and have protected lands for them to live on. So if you're traveling there, always bring a goat.

U - Unicorns. These magical horses with a single horn are not seen in Greek mythology because the Greeks believed them to be real. Though they described it as a wild donkey which liked to skewer people from behind with their horn!

V - Vampires. There are so many tales about these bloodsuckers. Once upon a time, they were grotesque and fearsome, but now they are sexy and sparkling. Vampires used to cause mass hysteria through fear, and now they do it with their hot bodies.

W - Werewolves. Oh look! Another creature that was once feared and is now the hero in several paranormal romances. And yet, women generally still don't like hairy men.

X - Xing Tian. A headless Chinese deity whose nipples are eyes and his belly button a mouth. Yet even without a head, he continues to fight battles. The image in my mind is like some weird Sid and Marty Croft character. Frightening.

Y - Yeti. The Abominable Snowman. He was once worshiped as a Glacier Being, the god of the hunt. Nowadays, instead of hunting, he's being hunted by eager people with poor photography skills.

Z - Zombies. Reanimated human corpses. Here's a handy tip: stop a zombie by feeding it salt. You might be stocking up on shotguns for the zombie apocalypse, but I'm buying a salt mine!
Posted by Christine Rains at 12:00 AM