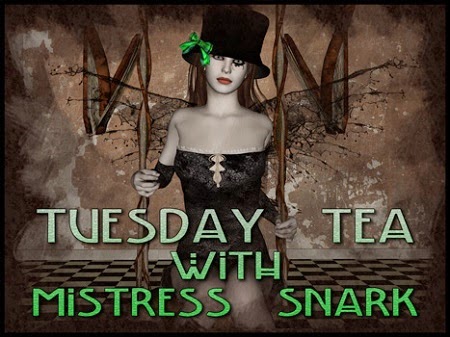 Welcome to the Untethered Realms edition of Mistress Snark's Tuesday Tea. Afternoon tea is a most civilized British invention – an opportunity to snack with impunity. However, in Mistress Snark's parlor, you never know what might be floating in your tea or what those cute little sandwiches are hiding under the bread.


As full disclosure, any guest appearing here must sign the usual waivers regarding food poisoning, bodily harm caused by Jezebel, random attacks by minions, or permanent brain damage resulting from the questions posed.


Today's guest is M. Pax, prolific Untethered Realms author of both The Backworlds series and The Rifters. It's so nice to have you here today. Would you like some tea? Or perhaps Jezebel's special punch? I don't know what's in it but it could prove detrimental to your health.

M. Pax: Mistress Snark, how are you? It's been awhile since I've been in your parlor. It's as fascinating as ever. You know I'm always game for the special punch. What are those bits floating in it?

Mistress: Jezebel has added ground dinosaur bones to flavor this special UR blend. She calls it, “Author Inspiration.” *winks at audience* Are you feeling inspired yet, now that you’ve had a chance to taste it? I must say the feathers you’re sprouting out of the top of your head are rather fetching. I can tell our gentle audience is stunned by the change. As an author, how might you incorporate your current condition into a storyline?

M. Pax: Did you ever read about those giant carnivorous birds that roamed the Earth after the dinosaurs? Yeah, I think I'd have to use those birds. I want meat. Mmm, meat.

Mistress: I think your stomach rumblings just registered on the Richter scale. Don’t worry though. Motion sickness bags are being passed out to the audience. More punch? *waves Jezebel over to refill M.’s cup* Oh, and please be careful with your pinions. That’s quite a wingspan you’ve got going there. Wouldn’t want to knock someone down…unless they’re meat…

So, here’s a scenario for you. While searching for a meaty snack, you wing into the town of Settler, OR, the town that your series, The Rifters, is based in. What do you find there? A filling meal or big trouble?

M. Pax: Look at them all jiggle. Like Jell-o. I like Jell-o. Meat Jell-o. Yes, more punch.

Settler has a lot of weird. That dude from 1888 probably is past his expiration date, so I'll avoid him. The librarian chic looks tasty. I should stew her before she learns to kick my ass. Can I say ass on this program? The ghosts aren't filling at all. I'd have to spit them out. Those bee things... hey, maybe they'd give me fire. I might go for those. What's next for beasties descending on Settler? You'll have to wait for book 3. I do know, though.

Mistress: Perfectly acceptable. Jezebel says ass – and worse – all the time around here. The stringy dude might get stuck in your teeth as you chew but the ghosts could add some flavoring to the stew, don’t you think?

Oh dear, I see our gentle audience stampeding toward the exits. You do look a mite menacing, M. Perhaps you should go home and sleep off the effects of all the punch you consumed.

It was lovely to have you here in the parlor. Please walk, don’t fly, out of the studio. We don’t want a citywide panic to ensue.


M. Pax: The tentacles are harmless. I swear! Thanks for having me Mistress Snark. Every time I have tea here, I get my wings. 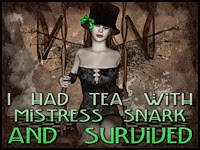 Congratulations, M. Pax! You’ve earned the Tuesday Tea Survivor badge, suitable for your blog or hanging on the bathroom wall. Go ahead and take it with you.


M. Pax is author of the space adventure series The Backworlds and the urban fantasy series The Rifters. Fantasy, science fiction, and the weird beckons to her, and she blames Oregon, a source of endless inspiration. She docents at Pine Mountain Observatory in the summers as a star guide, has a cat with a crush on Mr. Spock, and is slightly obsessed with Jane Austen. There are more books and stories credited to her name. Learn more at mpaxauthor.com and pick up a great read for free.