There are some books that show it is possible to take two familair things, mash them together and make something specatacular. That is Mina Khan's Wildfire. 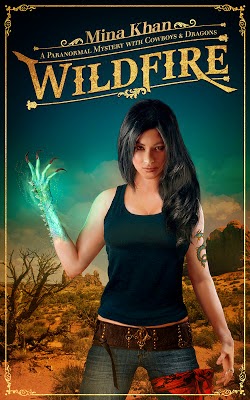 About Wildfire
Lynn Hana Alexander is a 25-year-old Japanese American shapeshifter haunted by guilt. She’s been questioning herself and her dragon abilities ever since she failed to save her grandmother.

When her best friend is threatened by mysterious fires burning up acres of West Texas, Lynn rushes to the rescue determined not to fail again. However, with a tempting firefighter, a flirty city developer and dragon pheromones distracting her, how is she going to find the arsonist?

And worse: is her primary suspect a malicious rogue dragon or the love of her life?

My Review
First, I must admit up front that I had an opportunity to meet Mina Khan at Indie Romance Con 2014 in Lebanon, TN. Conversation was fluid and easy-going. She's a fun person to be around and I loved hearing her speak.

Now about Wildfire...when I first held the book, I noticed this description on the cover: A Paranormal Mystery with Cowboys and Dragons. Well, I'm pretty familiar with cowboys and indians but mashing a dragon mythos with a cowboy scene is a new one on me. So I had to read it. I'm sooooo glad I did.

Lynn has an ability very few know about, her ability to shift into dragon form. Since the loss of her grandmother, she's been troubled and even doubtful of herself. But when her dragon senses incite her to protect her BFF in West Texas, she finds she's drawn into the mystery of the wildfires, desperate to find out if the constant combustion is caused by some human arsonist or maybe, just maybe, someone like her. If so, what was the end-goal?

Lynn suspects a couple of gents, one more of a city slicker and the other a badboy ranch owner. Both tease her dragon senses with manly musk, mystery and look marvelous sporting thigh hugging Levis jeans.

There were times when Lynn's dragon seemed to have an agenda of its own, a more carnal need to fulfill. And it was such a fantastic adventure following Lynn along the ups and downs she experienced, as well as the emotional highs and lows. Mina does a wonderful job engaging the reader so it really feels like you're there to feel the heat and sweat from the flames and fire.

Wildfire is a must read that shouldn't be missed out.