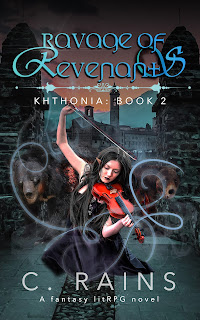 Everyone knows if you split the party, the players will die.But what if it’s the only way to discover who the villain might be?Nora Quinn has spent years honing her mystery solving skills, and when the game calls for several days of gathering information, she’s excited to uncover who the evil necromancer is. She plays Essaerae, an elven bard who is at home with the aristocrats of Willowbright Woods and political maneuvering. Yet her friends are not. They’re enjoying their new lives trapped in the dark fantasy world of Khthonia and finding the way home is no longer a priority, especially if it means hours of tedious investigating.Assassins set their sights on the heroes and undead attack the city. Someone on the esteemed Council is likely the necromancer, and to end the curse on Khthonia, the players must unmask them. Nora’s left to figure the puzzle out on her own. The problem is, if she splits from the party, she will die.A fantasy LitRPG/GameLit for fans of table-top role-playing games.