#Fantasy Worth Reading: Seven Strengths: A Tale from Turaset #BookReview 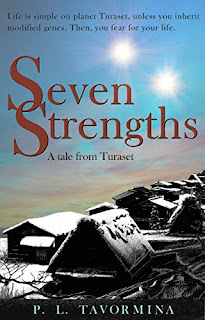 Blurb: Discover the world of Turaset.

In a remote country village, seventeen-year-old Celeste yearns for excitement. When the bright lights of a distant city beckon, she makes her way there, and city folk show Celeste more of the world than she ever imagined.

But these people have their reasons to cozy up to a country teenager, because Celeste’s family carries an ancient genetic ability to track carbon emissions by sight. The trait is powerful enough to undercut Turaset’s oil industry, and the titan running that industry wants Celeste’s family killed. Soon, she realizes how out of her depth she is.

Seven Strengths is an otherworldly but familiar coming-of-age story. It highlights the enduring strength borne of family and friends.

Jeff's Review: Seven Strengths is a novella in P. L. Tavormina's Industrial Age series. The tale is a coming-of-age story in which Celeste journeys from her sheltered life in the country to attend school in a city. She chafes under the drudgery of work in the family business, a country inn--a business she is destined to inherit some day in the future if her parents get their way. City life broadens her horizons and certainly has its appeals but also teaches her, through some hard lessons, the value of her family and the opportunities at home.

The setting is a planet called Turaset, which was colonized by a group of refugees from planet Earth. The refugees had hoped to create a world where people lived in harmony with the environment, so as not to destroy it. The state of technology is roughly early twentieth century. Automobiles and electricity have been introduced in some places and the major source of power is fossil fuels. The conflict between the combustion industries and the wisdom of the original refugees is the story's underlying driving force.

The story has some elements of science-fiction, but there are some characters who have pseudo-magical abilities. Some of these abilities are seen as threatening by the combustion industries and those who possess these abilities are hunted. Some members of Celeste's extended family have such gifts. The level of technology is certainly not futuristic, so I enjoyed the story as a fantasy set in another world. If you're looking for lots of action and fighting, this is not the book for you. If you want more of a domestic story with lots of character development, give Seven Strengths a read. You'll be glad you did.