The Stars: What's Out there? E

At last, at last! There's a new space telescope out there to get better looks at the origins of the universe, distant planets, and galaxies, plus our own solar system. The James Webb Space Telescope is an orbiting infrared observatory. It will complement and extend the discoveries of the Hubble Space Telescope with longer wavelength coverage and massively improved sensitivity.

The James Webb is bigger and more powerful, and I'm sure we'll learn things we have yet to imagine. The telescope will orbit Earth 1.5 kilometers away. It is an international program led by NASA with its partners, ESA (European Space Agency) and the Canadian Space Agency.

Webb has a primary mirror made of 18 segments comprised of ultra-lightweight beryllium. Its biggest feature is a tennis court-sized five-layer sunshield that attenuates heat from the Sun more than a million times. The telescope’s four instruments - cameras and spectrometers - have detectors that can record extremely faint signals. One instrument has programmable microshutters, which enable observation up to 100 objects simultaneously. How Cool!
Exciting news! James Webb has now reached its orbit and successfully deployed the mirrors. Its first target is star HD 84406 in the Big Dipper. Can you hear me squealing?
Although we don't have flying cars yet or live on the Moon, amazing discoveries about our solar system, galaxy, and universe have been made in recent years. There's water on the moon and Mars. There are possible signs of life on Venus. So, I'm excited to see what James Webb will discover. What do you think we might find?

Speaking of stars and space, I have a new book out! Endpoint, Backworlds Book 8 is now available! 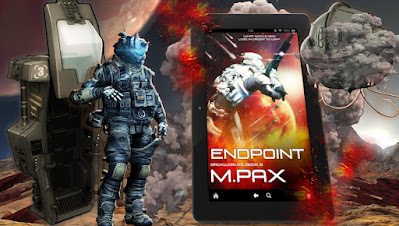 GET ENDPOINT
Direct from M. Pax
Buy direct from me and get 25% off all purchases. Use coupon code 4XCZKXTR2W / Referral Bonus: When you refer any purchased product to a friend who becomes a customer, you both get 10% off.

What are you willing to lose in order to win?

Craze can no longer keep the evil Quassers contained, and winning the war gets harder. The Quassers unite forces with another enemy and become more threatening, more destructive, and more murderous.

Planet after planet falls, and Craze is desperate. The only chance he has is a glimpse at little hopes that might grow into a viable strategy. But only if the other planets work with him. So far, everybody is still looking out for themselves and hates him for the gut-wrenching decisions—the deaths of innocents in exchange for all of humanity’s survival.