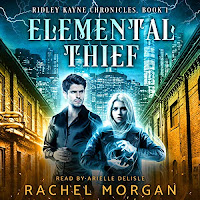 Elemental Thief is book 1 in the young adult fantasy series, the Ridley Kayne Chronicles, by Rachel Morgan. Set in a futuristic dystopian-esque environment, the Global Simultaneous Magic-Energy Conversion caused a devastating world-changing magical overload, which subsequently caused magic to be outlawed, and created a deep divide between the have and have-nots. Ridley Kayne is like a modern-day Robin Hood, robbing from the rich and giving to the poor, in order to narrow that gap.
Magic, in a land where it has been outlawed, is Ridley's superpower. It's how she's able to slip through the cracks and infiltrate high end properties to steal valuable items, sell them to her fence, collect the money and give to those in need. Chaos is bound to explode when using magic. Using it is risky. But in this world, magic for some is as inherent as the air they breathe. Tamping it down and denying it has dire consequences.
As in most YA, Ridley has a love interest in her nemesis Archer who is good looking and full of secrets. I've no doubt we are going to be seeing the pair working together more in subsequent books because they have a world to right again.

Though not listed as a dystopian read, the setting in this book has the vibe of a planet damaged by human's overuse of magic and has echoes of the challenges we're now facing with out own planet. It reminded me that we are living in the future now...an interesting thought.

There is plenty of action in this book, fast-paced with lots of twists and turns. A murder, a wrongful arrest, and a quest for justice where maybe none is due…

Lots to like and hold your attention. I had forgotten how much I liked YA and this book reminded me.

If you'd like to read it, it's FREE on Amazon.