Researching & Launching a Novel During a Pandemic 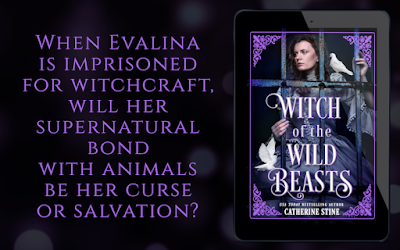 Launching a book during a pandemic is no joke. Nevertheless, the date I picked turned out to be smack dab in the thick of it. Witch of the Wild Beasts is a dark fantasy for dark times, and hopefully a good diversion, which we all need a dose of. The process of researching a book is always a deep diversion from the daily grind, pandemic or no pandemic. Allow me to tell you about the process.
I’ve been fascinated by the Eastern State Penitentiary in Philadelphia ever since I visited for their Halloween fright tour, and saw the actual, untouched surgical room from when they opened in 1829. It still had a rickety metal operating table, sharp and crusty medical tools, and frighteningly tiny holding pens. The idea for Witch of the Wild Beasts rushed in right then and there: a thriller involving doctors devising medical mischief and unlucky prisoners, including Evalina Stowe, a woman accused of witchcraft.
It turns out that in the 1850s, when my novel takes place, Philadelphia experienced an explosion of new medical “breakthroughs”, from the wacky to the notable. At the offbeat end, there were herbal remedies inspired by the German Pow Wow or Braucherei practitioner, a combination of ritual prayer, herbal applications and the chanting of charms to not only heal the patient, but protect the farmers’ cattle and sheep. On the remarkable side, were the “plastic operations” of Dr. Thomas Mütter, who pioneered plastic surgery at Jefferson Medical School, and who invented applications we use to this day, such as the Mütter flap. This uses a flap of living skin, still partially attached, to cover open, damaged areas until they can heal, at which point the connected flap is cut and stitched. Dr. Mütter, who appears in the book, was quite the flamboyant dresser, who liked to match his suit to the color of his carriage. To this day, the Mütter Museum is a go-to attraction for all sorts of medical oddities, including dozens of wax molds of eye diseases and ‘The Soap Lady’, a woman whose body was exhumed in Philadelphia in 1875. She is nicknamed this because a fatty substance called adipocere coats her remains.
I grew up in Philadelphia and thought I knew a lot about its history, but in the process of research for the novel, I learned many new, startling facts. I love writing historical fantasy for this very reason.
Before Eastern State Penitentiary was built with its single cells and solitary confinement, people of all ages, including children were thrown in one holding pen at another location. Thus, Eastern State revolutionized the system and was considered state of the art when it was built. It was equipped with skylights, central heating and some of the very first flush toilets, and inspired by the Quakers’ belief that solitary penitence could quell an inmate’s urge to commit crimes.
Yet it wasn’t long before people realized that “paying penitence” 24/7 alone in a cell did not cure people of criminal behavior. Rather, the isolation drove them stark raving mad. Charles Dickens, who visited the prison, wrote a scathing treatise, saying, “Solitary confinement is rigid, strict and hopeless… I believe its effects to be cruel and wrong.” Oddly enough, during that era the phrase What the Dickens was a euphemism for What the Devil! Go figure.
Even in this cultured, modern city of Brotherly Love, superstition and chaos were alive and well. According the an article on the Historical Society of Pennsylvania blog, a sensational case occurred in 1852, with newspaper headings entitled, "Superstition in Philadelphia," and "Witchcraft - Evidence of an Enlightened Age”.
"Mary Ann Clinton & Susan Spearing, residents of Southwark Ward, were formally charged at the 'Court of Quarter Sessions,' with "conspiring to cheat and defraud George F. Elliott, by means of fortune telling and conjuration," in order to extort money. The 'Commonwealth of Pennsylvania' alleged that the two women were giving Mrs. Elliott, "a bottle containing some portions of Mr. Elliott's clothing, and telling her that as the clothing decayed, so Mr. Elliott would moulder away, until he would finally die by virtue of the spell..."

It appeared that Mrs. Elliott suspected her husband was guilty of infidelity, a belief that "had so strong an effect upon her as to make her wish for his death." Thus, she had enlisted the services of Clinton & Spearing, who also encouraged the jealous wife, as an "ordeal of witchcraft," to "take her husband's clothes, tear them to pieces, fill the bottle with them, then boil the contents nine times, and this would give him such extreme pain as to cause his death."
Enter my heroine, Evalina, accused of witchcraft when her pet bird, flies down the throat of her violent boss and chokes him to death. Add to this mix, Dolly Rouge, her prison neighbor and ex-bawdy house madam, Lightning, a homeless urchin who knew Evalina’s brother and was jailed for stealing horses, and Birdy, a handsome, kind Irishman jailed for a tragic accident while blasting granite for the railroad who Evalina falls for. Oh, and add a handful of sinister doctors, and Evalina’s perilous plot to gain justice for her brother’s murder.
Research is the grounding for the fire that ignites the writer’s mind. And let us all remember that after the Black Plague came the Renaissance. May we have one for 2020.

To see the novel on all sites click here.

Posted by Catherine Stine at 7:38 AM