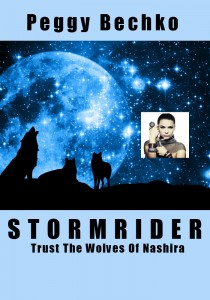 The main character, Tanith Aesir, is sent on a quest by the rulers of her world to find a stolen amulet that lends authenticity to the ruler who wears it. She rose up from the ranks of slave to being trained to serve the Council of Nine on Antaris.

Tanith is sent to Nashira where she becomes stranded when her ship crashes. Her origins, before being taken by the slavers, is on Nashira, and she forms a bond with a pack of wolves.

When the story open, she saves a man who was left for dead by her enemies. Turns out, he's a bounty hunter after the same amulet.

This adventure was part science fiction, part mystery, part mystical, part supernatural. It was an exciting mix with twists and turns and great characters I enjoyed spending time with.