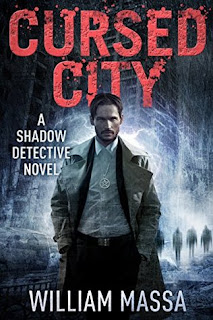 Blurb: My name is Mike Raven, and the weird and supernatural are my life. Monsters murdered my parents when I was eight. Turns out my folks were paranormal investigators and Hell always settles its debts. Naturally I decided to join the family business.
For two decades I've studied the occult and traveled the world hunting nightmares. Vampires. Shifters. Demons. Wraiths. I've faced them all. But my greatest challenge still lay ahead...From the moment Celeste stepped into my office, I knew she was in trouble. Black magic trouble. Her father had promised her soul to a powerful demon on the day she was born. Now, twenty-one years later, the forces of darkness were gathering to collect their long-awaited prize.Guess who's about to pick a fight with the Devil himself?

Christine's review: Mike Raven hunts monsters. When Celeste hires him to help her, he isn't certain he can help her. Yet he isn't about to let a beautiful woman suffer. But will he be able to fight back the forces of the Devil himself?
A fantastic start to this urban fantasy series. If you like Supernatural, you're going to like this book. Great hook at the beginning to bring us into the world, and nice descriptions all around. Plenty of action and a few nice twists at the climax. Can't wait to read more in the Shadow Detective series!

Buy the book here!
Posted by Christine Rains at 6:15 AM