One of the fun things about writing my characters is that they say the darndest things. I almost wrote that I can make them say anything I want, but that’s not strictly true. The story-line must fit their character, or they’d never let me get away with putting words in their mouths. They really do have minds of their own, especially my secondary character Franny!

First, a little about Franny. The sleuthing sidekick of reluctant ghost-whisperer, Indigo Eady, Franny Bishop also happens to be the ghost of a former Victorian madam of some repute. Walking with a foot in both worlds, she’s still “living” the high life in modern day Sabrina Shores. The old English market town is a haven for the dearly departed, and Franny leads quite the active afterlife. Indigo is not far off when she says that Franny exists in the modern world better than she does.

Existing as she does, Franny has become quite the unintentional logophile—a lover of words. And except for a few instances which you’ll see further down, she’s quite the colorful speaker.

And she has reason!

Sleuthing is tough work. Everyone needs an outlet when frustration strikes, right? Here are some of Franny’s favorite Victorian expletives (the corresponding definitions are mine):

And then there’s the telly. How many ghosties do you know who watch television? Franny does. She is addicted to late-night black and white crime shows, featuring tough-guy private dicks such as Mike Hammer, Sam Spade—and even Charlie Chan.

Franny loves to use the slang she picks up...

Rob stood—if you counted stooping at the waist as standing, and I did. Franny lifted her skirts and floated around him tsking at his rumpled condition.

Rob raised his pant leg to assess the damage and Franny stopped and bent to check out his knee. “A bit of a lump, but all in all, a nice gam, don’t you think, Indigo? Placed higher and you’d have made a clean getaway. You’re out of practice, dear.” She shook her head.

Franny doesn’t always get it right. Sometimes she's a bit confused, like in this scene where she tries a bit of matchmaking...

“Life is too short, don’t waste it on boredom. You need to follow your dreams. And speaking of dreams, that Badger is a real dream ship. Have you spoken to him yet?”

“You mean dream boat and Badger is ancient history, Franny. We were kids. Besides, we’ve both moved on. He has a girlfriend.”

“Pshaw,” she snorted, in a most unladylike manner.

“If an event or anniversary woke him from the ether, he might only now be coming out,” Franny said.

I snorted. Franny’s interpretation of modern slang tickled my funny bone. We’d recently discussed gay people ‘coming out’ after my break-up with Francois. I never expected to hear the term used in connection to a haunting.

Franny continued, “You may laugh, but he could be a newborn.”

I laughed again. “You mean newbie.” As in newly departed.


And what self-respecting ghost isn't concerned with how she looks?...

“...Do I look warm?” She patted her ebony hair. Her teal skirts flared from a waist so tiny that Barbie would be green with envy, and her bright white gossamer blouse hugged her ample bosom in flawless perfection.

As if she ever looked anything less than perfect. “You mean hot. And yes, you’ll do.”


But seriously, can a ghost be faulted for using "cobblestones" instead of "road"?...

“Good thinking, Indigo,” Franny said, as if she were my conscience sitting on my left shoulder giving her approval. “Plenty of time down the cobblestones to spill the beans.”

“You mean down the road…” I corrected Franny automatically.

I love Franny’s character. She makes me laugh all the time. I hope you enjoyed learning about her as well.

What do you think?

Is Franny a true logophile?

Or one forgetful ghost?

If you enjoyed reading about Franny, these snippets are from my upcoming cozy paranormal mystery novella,
A Scandal in Boohemia. 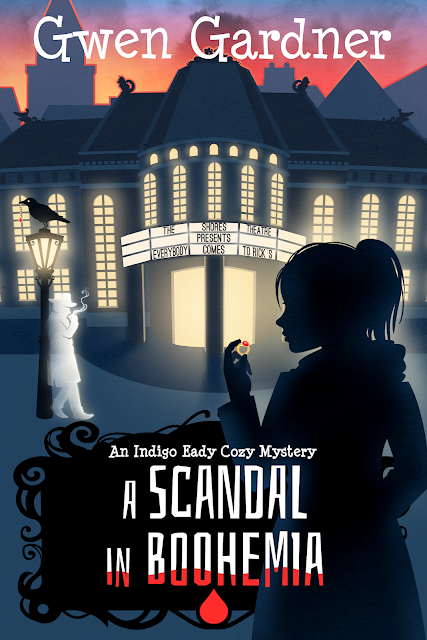 She jumps on the first job offered. All she has to do is work undercover at Sabrina Shores Theatre, find a ghost thief, and cross him over. Easy peasy, right? Until an actor is murdered and Indigo’s fingerprints are all over the pistol like ink on a Rorschach test.

Forced to dust off her rusty sleuthing skills to clear herself, Indigo enlists the help of her ghost friend Franny and her hunky ex-boyfriend Badger to help solve the crime. Now, how to keep her investigation from the handsome inspector?

Indigo Eady is a reluctant ghost whisperer, but she’s grown quite attached to Franny Bishop, a former Victorian ghost madam of some repute. Franny’s afterlife makes Indigo’s life look like she has one foot in the grave. Much to Indigo’s chagrin, Franny is determined to find her a man. After all, there are plenty of handsome men around ripe for the picking, and Franny’s an expert. In the meantime, Indigo and Franny have murders to solve.